Come on, you know the drill. You have scores of things going on and you’re huffing and puffing to keep pace. And on top of it all, your mood or anxiety disorder is spiking. Ever wonder if you’re horribly overstimulated?

Sure, it’s not a problem for many; however, just as many of us are wired differently and don’t do well with commotion. Can we once and for all recognize and accept that?

Was talking with a friend a couple of weeks ago, and lo and behold we discovered even more common ground. Oh, we knew we shared certain mood and anxiety leanings. But out of nowhere came something else…

We’re easily overstimulated. And if we don’t manage it, life can become way harder than it has to be.

How ’bout you? Ever think about it? This overstimulation biz can explain a lot of discomfort. And understanding it leads the way toward relief.

If you do a web search for overstimulation, a reference to babies and children will likely rank high. That makes sense, doesn’t it? Sure, every so often noise, goings on, sensations, and too many faces add up to more than the little guy or gal can cope with. And, boom, on come all sorts of misery (for all parties involved).

But so it is with many grown-ups…

Way too many visuals, sounds, smells, touches, flavors, vibes, thoughts, feelings, and opinions. And before we know it the beaker’s full, even overflowing.

And if a mood or anxiety disorder sufferer is in the midst of the tumult, the trouble threshold can present much faster and the fallout can be more brutal.

By the way, here’s an interesting tidbit. It’s believed that 15-20% of us are considered to be a “highly sensitive person” (HSP). In the world of science it’s known as sensory-processing sensitivity (SPS).

In short, HSPs are much more responsive to their environment. And that’s because their nervous systems and minds allow more stimulation to enter without any sort of automatic or unconscious filter. Also, HSPs cognitively process their received stimulation in greater detail than others.

Think there might be potential for overstimulation here? Heck, who knows? Maybe you’re a HSP. 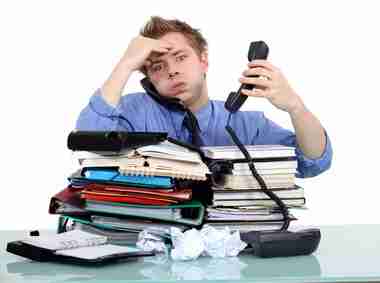 “This is just silly. I can’t handle it all anymore. No way.”

You know as well as I that peacefully living with a mood or anxiety disorder is all about well-considered and targeted management. And if that doesn’t include proactive prevention strategies we’re in for a world of hurt.

And so it is with the perils of overstimulation.

But how can you prevent or manage something if you don’t know what it looks like?

When it comes to overstimulation…

Now, I’m not saying you have to run the table, experiencing all of them, but you get the idea. Keep an eye out for these twelve, because I really believe you’ll come to know when the trouble threshold is about to be crossed.

You know, it’s so easy these days to fall into the trap of taking on way too much, all at once. And even if we aren’t choosing to pile it on, stimuli surround us, constantly invading our personal space.

Sure, it’s not a problem for many; however, just as many of us are wired differently and don’t do well with commotion. Can we once and for all recognize and accept that?

Overstimulation is a major impediment to a peaceful existence. And it packs an even bigger wallop for someone enduring a mood or anxiety disorder. Now that you know it’s a player, and what it looks like, you can begin connecting some dots.

If there’s a personal fit here, it’s time to work toward management. And with overstimulation, that means gaining perspective and screening – eliminating – incoming stimuli.

You have the authority, right?

And as long as you’re doing some reading, kick-back and leisurely eyeball hundreds of Chipur titles. Plenty of knowledge right at your fingertips.

Next Post: My Life Is HELL and You Want GRATITUDE? Really?

Previous Post: 6 COPING with an ILLNESS Tips If You Struggle with a Mood or Anxiety Disorder