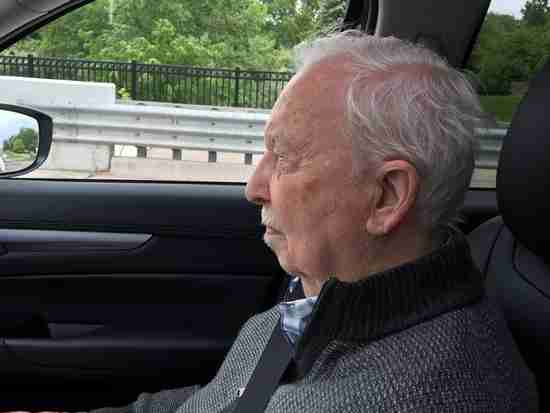 My dad moved-on to the next life last week. Though the end snuck-up on us, going on ninety-five and with some medical kinks, his transition wasn’t shocking. Still, now he’s gone. And there just have to be some positive takeaways…

Human beings die, including me. Really, it’s one of life’s greatest wonders. So I’ll strive to be at peace with it – even embrace it.

Don’t know about you, but I’m not going to navigate through a tough time without making sure there’s at least one takeaway – positive, that is. I mean, awful times provide unique opportunities to learn and grow.

The Beginning of the End

When he was placed on the facility’s memory care unit last spring, it became obvious to my brother and me that “Pop” was taking his final lap. And over the past few months we witnessed him steadily run out of steam. Yeah, it was hard – poor guy.

The Thursday evening before he died, I was feeding my dad some “dinner” – Ensure with a syringe. Not only was he not interested, he wasn’t even talking. I know now that his refusal of food and inability to speak were signs that his life was coming to an end. But at the time I figured it was just part of his exhausting race.

Well, I returned Saturday morning and I could barely absorb what I saw. Staff was getting my father out of his clothes and putting a gown on him. They then laid him down in his bed. I called my brother and suggested he come when he could, because it was obvious Pop could hit the finish-line anytime. I mean, you just know.

My brother and I spent Saturday and Sunday at our dad’s bedside, doing all we could to somehow provide comfort. Given his unresponsive state, we had no idea if our efforts were at all effective. Heck, who knows? Maybe we were trying to comfort ourselves.

Heart-wrenching were the many moments of holding his hand and gently rubbing his forehead as he cycled through episodes of apnea then rapid-breathing, restlessness, and crying-out. And only during those episodes would he open his eyes. Looking directly into them, we could see what we believed to be, well, terror. It still haunts me.

Did we agree that tough times – even the worst – provide unique opportunities to learn and grow?

Well, that’s exactly what I was faced with that early Monday morning. Was I going to let my father’s death, and the two days of anguish preceding it, amount to nothing more than just another life experience?

As I sat by my dad’s bedside, it was 100% stimulus overload. So many good and bad things ran through my mind. Still do. But it’s these takeaways that continue to feel positive and lasting…

You know, it doesn’t matter how equipped and prepared any of us may think we are when the death of a loved one, or another mega-traumatic event, occurs.

It’s just hard, and finding those positive takeaways really helps – during and after.

Ah, Pop. Well done, you lived a good and right life – and I love you. Though I’ll miss you, I’m thinking I’ll see you down the road. Thanks for everything…

Next Post: Hope for Depression: An Important Update on Drugs in Development