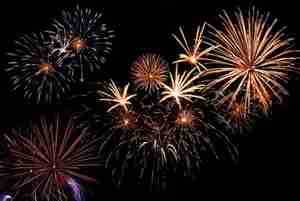 Today is Independence Day in America. Happy 237th to this great country. Hey, are you depressed? Are you enduring oppressive fear and anxiety? Why not make it a personal “Independence Day” (from self)?

July 4th – Independence Day – is super-special in the good ‘ole US of A. Fireworks, parades, family reunions, ballgames, and carnivals abound. A spirit of celebration is in the air.

Are you depressed? Perhaps you’re in the midst of overwhelming and terrifying fear and anxiety. Maybe both! I wonder if you could take the cue from America’s Independence Day and establish today as a personal “Independence Day” – from self.

Okay, can’t resist – time for a smidge of history. You may know, the legal separation of the Thirteen Colonies from Great Britain actually occurred on July 2, 1776. That’s when the Second Continental Congress voted to approve a resolution of independence that was proposed a month earlier by Virginia’s Richard Henry Lee. It was this resolution that declared independence from Great Britain.

But now to that matter of personal independence. If you’re enduring depression and/or anxiety you’re likely deeply tuned-in to your symptoms. I’d be willing to bet they dominate your thinking, feelings, behavior – your life. And if this domination has gone on for a lengthy amount of time you may have actually become your disorder(s), the very sum of the symptoms you deal with day in and day out. I don’t think it would come as a surprise to you if I added that all too often buckets of self-hate, shame, guilt, and anger come along for the ride.

It’s a matter of self-tyranny. Tyranny being all about oppressive power.

In the face of self-tyranny, I encourage you to declare independence from the oppressive power, just as the Second Continental Congress did from Great Britain 237 years ago. Heck, why not actually draft your own declaration?

This is very much about acceptance, don’t you think? I mean, if you’re to declare independence from self-tyranny – so you can prosper and reach your full potential – you have to accept your immediate circumstances just as they are. How else would you know from who or what you’re declaring your independence?

How ’bout I lead with a personal example? If you’ve followed Chipur, you know I’ve lived with a nasty anxiety disorder darned near my entire life. ‘Course, there’s always been plenty of associated depression. For sure, there was a time when it all dominated, yes, my thinking, feelings, behavior – my life. And in time, I became my disorders.

And then one day I decided to fully accept my emotional/mental health circumstances as they were. I fully believed – still do – that the combination of my on-board-at-birth anatomy and biochemistry, coupled with developmental years environmental factors, set the stage for a lifelong leaning toward the anxious and associated low-grade mood.

When I made that decision it was, in fact, a personal declaration of independence. And that declaration has allowed me to prosper and given me a fighting chance of realizing my full potential. What’s not to like?

On this American Independence Day, I urge you to declare independence from self. And remember, before you move on to document signing you need to have taken a full accounting of yourself, accepting who it is you truly are.

In a chance of a lifetime

Are you depressed? Oppressive fear and anxiety dominating your life? Declare your personal independence, and get on with the business of prospering and realizing potential….

Well over 500 Chipur articles await your eyeballs. Check-out some titles.

Next Post: Stress and Anxiety? What to Do About Depression? Crank-Up a Sad Song!

Previous Post: Brisdelle Approved for Hot Flashes: “What, is it a mini-Paxil?”