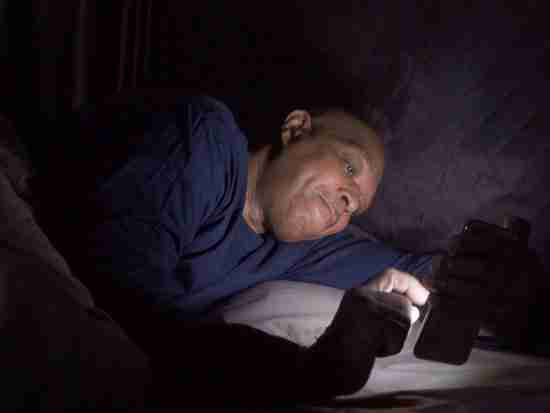 We love electronic devices. Smartphones, tablets, laptops, gaming systems: seems we can’t get enough of our screens. All well and good, except for a little something known as blue light. And combining it with an emotional/mental disorder can be hazardous. Let’s learn why…

Our friend has hit the sack. But he didn’t go it alone, did he? I’m sure whatever he’s watching is providing comfort as he attempts to nod-off. But given he struggles with bipolar disorder, I’m equally as sure he won’t get a refreshing night’s sleep.

PsychPearls, featured on Psychiatric Times, is an excellent podcast. Psychiatrist Chris Aiken and psychiatric-mental health nurse practitioner Kellie Newsome handled the most recent edition, “Blue Light, Depression, and Bipolar Disorder.” I found it especially interesting and relevant, so I’m bringing you a summary.

Now, the podcast features two people, but things will flow more smoothly here if they speak with one voice: AN.

What is blue light?

Blue light naturally helps us regulate our sleep/wake cycle – circadian rhythm. But that’s where trouble may begin. Once upon a time, the sun was the only source of blue light. But now we’ve brought it indoors – artificially – via those screens we can’t get enough of, as well as LED and fluorescent lighting.

Blue light helps boost our alertness, elevate our mood, and increase our overall sense of well-being. However, as you may know from personal experience, excessive exposure to artificial blue light can cause eyestrain, fatigue, headache, and sleeplessness.

With that bit of background info under our belts, let’s get into the podcast summary…

AN kick things off by stating a foundational fact: our biological clock is set by the daily rhythms of light and dark – morning sunrise and evening sunset. They emphasize that this clock is huge when it comes to bipolar disorder. So huge, in fact, that it could be renamed fragile circadian rhythm disorder. AN share that many of their patients actually prefer the name over “bipolar disorder.” 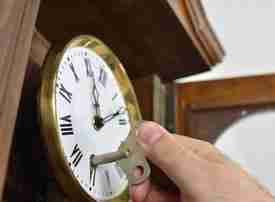 We need to keep our biological clock regulated.

Bipolar disorder is tightly linked to the genes that regulate our biological clock. AN point-out that lithium aids in repairing the clock by altering the expression of those genes. In fact, many of the therapies used for bipolar disorder, such as dark therapy and social rhythm therapy, work by managing the biological clock.

AN move-on to state that bipolar disorder isn’t the only emotional/mental situation that’s linked in some manner to disrupted circadian rhythm. First and foremost, they mention unipolar depression – but to a lesser degree than bipolar disorder. They also mention borderline personality disorder, substance use disorders, schizophrenia, ADHD, and PTSD.

AN emphasize that blue light in the 460-480 nm range (our screens get there) does a superb job of suppressing melatonin, thereby promoting wakefulness. A photoreceptor called melanopsin was discovered in the 1990s that only responds to blue light. It’s this receptor that regulates melatonin production through the time-keeper of the biological clock, the suprachiasmatic nucleus.

Our internal clock depends on strong shifts in blue-spectrum light in the morning and at night. But doing it the wrong way – high levels of evening blue light and low levels in the morning – disrupts circadian rhythm, as well as the clock genes implicated in bipolar and other emotional/mental disorders.

You guessed it, the primary culprits are our devices. And AN point-out that even distance matters. A smartphone close to your face emits just about as much blue light as a large screen TV across the living room.

The hard news about circadian disruptions

AN underscore the fact that those with emotional/mental disorders are more sensitive to the circadian disrupting effects of evening blue light, especially those enduring bipolar disorder. Bottom-line: melatonin is delayed, diminished, and more easily suppressed by blue light.

And that’s hard news because circadian disruptions – including shift work, seasonal and weather changes, and air travel across two or more time zones – often trigger new episodes of mania and depression. How ’bout this tidbit: mania is more common with west to east travel, depression more likely east to west.

The “fix” and we’ll close

When it comes to managing the negative effects of blue light there are all sorts of workarounds. I mean, it’s easy to find glasses, settings, software, and apps to combat the issue

But if you ask AN, there’s but one “fix.” And, really, it makes the most sense. We need to follow the flow of day and night. And that means bright light in the morning, low levels of blue light in the evening, and pitch dark in the bedroom.

After tricking ourselves for so long, it may not be easy at first, but it’s definitely doable – perhaps necessary.

Blue light and the emotional/mental disorders: a hazardous combination. And now you know why.

Do yourself a favor and listen to the podcast.

And as long as you’re doing yourself favors, check-out the hundreds of Chipur mood and anxiety disorder-related titles.

Next Post: 12 things to do when there’s nothing you can do

Previous Post: Being a kid these days? I interviewed my granddaughter