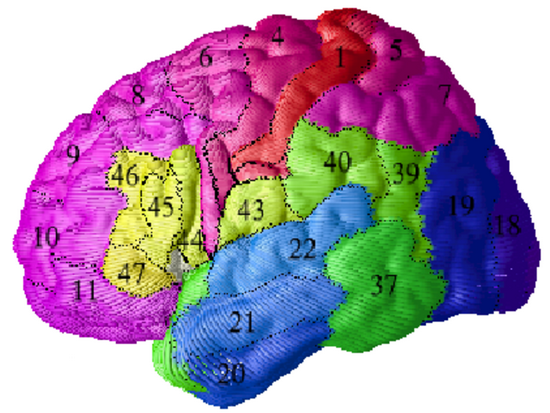 There are no coincidences. Things don’t work by chance, and I like to learn about the goings-on. That especially applies to how my brain generates mood and anxiety symptoms. You too? Let’s delve into Brodmann areas. I think you’ll find this fascinating…

When it comes to relief for our mood and anxiety woes, many of us look exclusively to the meds development pipeline. I can understand that, but the contribution of things like what you’re about to read is just as important and hopeful – if not more.

I was doing some research and bumped into an article on ScienceDaily entitled “How the brain balances emotion and reason.” It was a short piece detailing recent work by Mary Kate P. Joyce and associates, which was published in The Journal of Neuroscience.

I read about how emotional balance goes haywire in mood disorders such as depression, leading to unchecked negative emotions and the inability to snap-out of rumination. Then I read that all of this emotional balance biz is handled by brain region area 32. And if that wasn’t enough, the article said people with depression often have an overactive area 25, which is involved in emotional expression.

What are Brodmann areas?

In 1909, German anatomist Korbinian Brodmann defined and numbered regions of the cerebral cortex based upon cytoarchitecture – the study of the cellular composition of the tissues of the central nervous system under a microscope. In humans, there are 52 Brodmann areas.

Before we move on, let’s make sure we understand what the cerebral cortex is. The cortex is the 2-4 millimeter thick outer covering of the surface of our brain hemispheres. It’s all gray matter and comprises 40% of our brain mass. Without the cerebral cortex we have no attention, perception, awareness, thought, memory, language, consciousness, or sensory and motor functioning.

So why did Brodmann bother with such intense work? Well, it was about organization, because different parts of the cortex are involved in different cognitive and behavioral functions. And how they work together makes us who we are.

Going back to the research article, Brodmann area 32 (BA32) is the dorsal anterior cingulate. According to Joyce’s work, the area maintains emotional equilibrium by relaying information between cognitive and emotional brain regions. That puts the kibosh on negative emotions and rumination. 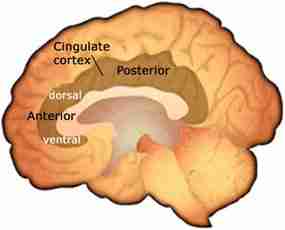 The scene of the action

But then there’s area 25, located in the subgenual area of the cingulate region. It’s just below and connected to BA32.

We’ve already discussed that people with depression often have an overactive BA25, a region involved in emotional expression. But what’s really interesting are the connections between the dorsolateral prefrontal cortex (DLPFC, a cognitive region), BA25, and BA32.

In rhesus monkeys, the DLPFC connects to the deepest layers of BA32, where the strongest inhibitory neurons reside. BA32 connects to every layer of BA25, allowing it to be a powerful regulator of BA25 activity.

In the brains of the non-depressed, the DLPFC signals to BA32 to balance BA25 activity, allowing emotional equilibrium. But in depression, silence from the DLPFC results in too much BA25 activity and out-of-control emotional processing.

A portion of the cingulate gyrus (part of the cingulate cortex), which consists of BA25, as well as parts of BA32, is believed to play an important role in the generation of major depressive disorder. That being the case, it’s been the target of deep brain stimulation.

Indeed, in 2005, renowned neurologist Helen S. Mayberg and collaborators described how they successfully treated a number of depressed people – individuals virtually catatonic with depression despite years of talk therapy, drugs, and electroconvulsive therapy (ECT) – with deep brain stimulation in BA25. Think about how incredible that is.

But there’s more. A recent study found that transcranial magnetic stimulation is more clinically effective treating depression when targeted specifically at BA46 (a portion of the frontal cortex), because the area has functional connectivity with BA25.

Can you see the role Brodmann areas play in depression interventions? Deep brain stimulation and transcranial magnetic stimulation have become effective treatments. And the best part is, the science is young. I’m sure there’s much more to come.

Now you know why I believe relief – hope – extends well beyond the meds development pipeline. And that’s great news because, frankly, there isn’t a whole lot to write home about.

In fact, I’ll go so far as to say I’m more excited about targeting Brodmann areas for direct depression intervention than I was about the approval of esketamine (Spravato).

Again, there are no coincidences – things don’t work by chance. And the more we can learn about why we’re depressed and/or anxious, the more comfortable we can become with our circumstances.

I suppose, though, what the world of science learns and develops is at least equally as important. For more than 100 years, Brodmann areas have provided direction and insight for research work and treatment. I believe they’ll continue to make a significant contribution.

Thought you ought to know.

So much more about the mood and anxiety disorders to be found in the hundreds upon hundreds of Chipur articles.

Next Post: The “news” game: Why you may want to quit