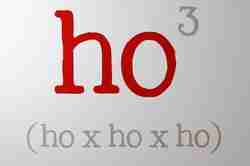 In keeping with my pledge to go short ‘n easy until after Christmas Day, how ’bout 15 fun facts about good ‘ole 12/25?

Yep, I said it in Tuesday’s post. We’re going to keep things short ‘n easy here on chipur until we’re past Christmas. And believe me, keeping things “short ‘n easy” doesn’t come – well – easy for me.

Thing is, Christmas is such an emotionally rich time. And for those enduring depression, anxiety, or bipolar disorder, the goings-on can be downright toxic.

So, then – why would I want to escort you through the depths of pathology just now? I’m thinking you may be doing a good enough job on your own.

And that’s that. Fun list, don’t you think? I hope you enjoyed it.

Wanna’ know what I’m gonna’ do next? (Do you care?) I have Luciano Pavarotti’s rendition of “O Holy Night” cued up and ready for a listen (or two). That ought to be worth a bucketful of tears (short ‘n easy, Bill).