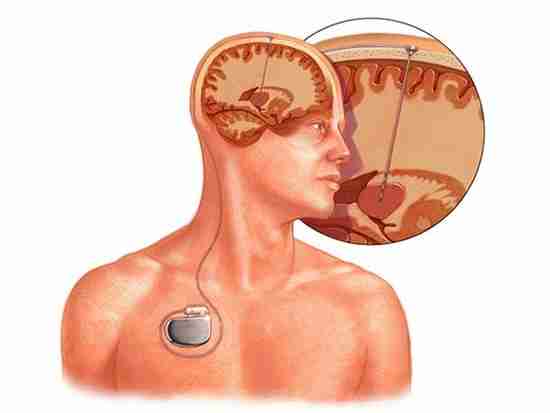 When it comes to the development of new interventions for depression, as well as other mood and anxiety disorders, drugs typically get the spotlight. Makes sense, because they can make the fastest impact. But there’s more in the pipeline than just meds. For instance, deep brain stimulation…

So though the science and technique are still developing for the treatment of depression, in my opinion we’re not talking lobotomies with ice-picks.

Lots of depression treatment hubbub these days, what with the FDA approval of the nasal spray esketamine (Spravato). And I believe there’s more in the immediate future with rapastinel. Of course, both are meds.

But as we look with great hope to new interventions for depression – all mood and anxiety disorders – meds aren’t the only players.

Interesting: I posted an article about deep brain stimulation for the treatment of depression here on Chipur seven years ago. And, go figure, development continues. Funny how that pipeline works, right?

Okay, let’s begin our discussion by talking about what DBS isn’t. That list includes transcranial magnetic stimulation (TMS), transcranial direct current stimulation (TDCS), and electroconvulsive therapy (ECT). By the way, you can enter any of them in the search box above and find some solid information.

DBS is an invasive (no craniotomy) procedure involving the implantation of electrodes in target areas deep within the brain. The electrodes produce electrical impulses that regulate abnormalities, including those of impulse, neurons, and brain chemicals. A pacemaker-like device is implanted under the skin in the upper chest, which governs the amount of stimulation. Go ahead, reference the featured image.

DBS is currently FDA-approved for the treatment of dystonia, epilepsy, essential tremor, OCD (some very cool things going-on), and Parkinson’s disease. And it continues to be studied for a variety of challenges, such as depression, addiction, chronic pain, multiple sclerosis, dementia, and Tourette syndrome.

So though the science and technique are still developing for the treatment of depression, in my opinion we’re not talking lobotomies with ice-picks.

As you likely assumed, DBS becomes a treatment option only after the failure of multiple interventions. So this is about treatment-resistant depression (TRD). Yes, DBS for depression is not FDA-approved, though procedures are being performed “off-label.” It’s a similar arrangement to using ketamine infusions for TRD.

By the way, many clinical trials are in the works. If you’re interested in that sort of info, including participation, head over to clinicaltrials.gov, enter the necessary info into the search box, and have at it.

Now, before we continue, keep in mind that DBS for depression is considered an investigational treatment. Also understand that results over the years have been extremely mixed. That includes complete remission, moderate improvement, no impact at all, and major cognitive and mood disasters.

At this time, the DBS treatment approach for depression is definitely not optimized; however, the numero uno consideration is the stimulation site. Makes a ton of sense, right?

Looking at the image to the left, the red sites are current targets and the green are candidates. We’re not going to review all of them, but among the current targets, the subgenual anterior cingulate cortex (sACC), ventral capsule/ventral striatum (VC/VS), and nucleus accumbens (NAcc) are three of the most used. If you’d like to review them all, check-out the article I looked to for reference. I’ll hit you a link at the end.

Of course, selecting a target site isn’t like playing pin the tail on the donkey. Taken into account are neuroimaging, human and animal studies, and anatomical and functional position based upon what are believed to be the dysfunctional neural circuits in mood disorders – or of their role in neurotransmitter systems. Well, let’s just say some thought goes into it.

DBS for Depression: The Future

DBS for depression will continue to be performed and studied, with a goal of completely removing the functional abnormalities that generate treatment-resistant depression. And the most important consideration will remain target selection.

And how ’bout this important takeaway from DBS research? Scientists believe that the fact that DBS has produced anti-depressant effects, using assorted targets, supports the notion that depression is a neurocircuitry disease involving the gumming-up of multiple neural networks. That, as opposed to the issue being just one brain structure.

Other important considerations in the ongoing development of DBS for depression include the realities of personalized medicine, which takes into account the specific needs of each patient. That means each DBS procedure will be unique. Refined study design is also key to future efficacy.

So There You Have It

The depression – mood and anxiety disorders – intervention development pipeline is the highway of hope. And, sure, it’s dominated by drugs, but procedures such as deep brain stimulation have to be taken into account.

Absolutely, deep brain stimulation will be an ongoing highway star. And, I might add, who’s to say its efficacy won’t go beyond treatment-resistant, to any depressive presentation?

Okay, here we go. If you had all the money in the world – right now – would you do it?

The bulk of the DBS for depression information, including the image, came from “Deep brain stimulation targets for treating depression,” written by Dominik Drobisz and Alena Damborska.

Take the time to peruse hundreds of Chipur mood and anxiety disorder-related titles. For sure, worth it.

Next Post: Augmenting Traditional Psychiatry with Asian Medicine: Even Docs Are In

Previous Post: “OMG! My coping props aren’t working. Now what am I going to do?!”