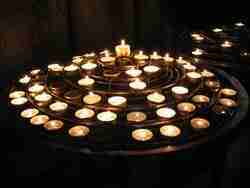 Depression relief, anxiety control – antidepressants, benzos, and all sorts of remedies and cures. I’m tired, Bill! Isn’t there something new, hopeful, and lasting out there?

Sure gets old, doesn’t it? So much of the painful and hopeless – and so little of the healing and lasting. Hmmm. Well, I came upon some cutting-edge research I believe you’ll find interesting and promising. Let’s talk…

So it’s common knowledge that meditation can provide depression relief and assist us with anxiety control. But a new study, the results of which were published in the November issue of Frontiers in Human Neuroscience, presents a different angle on the positives of meditation that’s well worth the chat.

Researchers at Massachusetts General Hospital, Boston University, and a handful of other research centers are telling us an eight-week meditation training program can have significant impact upon brain functioning – even when one isn’t actively meditating.

More still. There were significant differences based upon the specific type of meditation being practiced.

The research focused upon an almond-shaped bit of brain anatomy known as the amygdala. That’s it to the left in red. We’ve talked about the amygdala many times here on Chipur, and we’ve learned it’s a huge player in the processing of memory and emotional reactions. Yes, it’s “all-that” when it comes to presentations of depression and anxiety.

According to the study’s corresponding author Gaëlle Desbordes, PhD, “The two different types of meditation training our study participants completed yielded some differences in the response of the amygdala – a part of the brain known for decades to be important for emotion – to images with emotional content.”

Dr. Desbordes goes on to say, “This is the first time that meditation training has been shown to affect emotional processing in the brain outside of a meditative state.”

Again, we know the practice of meditation can have a positive impact upon depression and anxiety. But how ’bout it? This new study was designed to test the hypothesis that meditation training could produce an overall reduction in amygdala response to emotional stimuli. And that would certainly be a boon to depression relief and anxiety control.

So here’s how the study was set-up. Adults with no emotional regulation issues participated in an eight-week course in either of these two meditation practices…

Mindful attention meditation: The most commonly studied form that emphasizes developing attention and awareness of breathing, thoughts, and emotions.

Compassion meditation: A less-studied form that includes methods designed to develop loving kindness and compassion for self and others.

The ever-popular control group was thrown into the mix, as well.

So the lab work began, and 12 participants from each group had fMRI (functional magnetic resonance imaging) procedures conducted within three weeks before and three weeks after completing an eight-week meditation training. During the procedures the participants viewed a series of images of people in situations with either positive, negative, or neutral emotional content.

Nothing was ever said about meditation, and it was confirmed that the participants didn’t meditate during the fMRI procedures.  The participants also completed assessments of depression and anxiety symptoms before and after the meditation training programs.

Now to the results. In the mindful attention group, the post-training scans showed a decrease in activation in the right amygdala in response to all images. This supported the hypothesis that meditation can improve emotional stability and one’s response to stress.

In the compassion meditation group, right amygdala activity also decreased in response to positive or neutral images. But among the participants who said they primarily practice this type of meditation outside of the training sessions, right amygdala activity tended to increase in response to negative images. By the way, all of the negative images depicted some form of human suffering.

For the record, no significant changes were seen in the control group or in the left amygdala of any study participants.

Summing it all up? Let’s again turn to Dr. Desbordes…

“We think these two forms of meditation cultivate different aspects of mind. Since compassion meditation is designed to enhance compassionate feelings, it makes sense that it could increase amygdala response to seeing people suffer. Increased amygdala activation was also correlated with decreased depression scores in the compassion meditation group, which suggests that having more compassion towards others may also be beneficial for oneself. Overall, these results are consistent with the overarching hypothesis that meditation may result in enduring, beneficial changes in brain function, especially in the area of emotional processing.”

And, again, anything having to do with emotional processing is relevant to those enduring a mood and/or anxiety disorder.

Depression relief, anxiety control – antidepressants, benzos, and all sorts of remedies and cures. Are you tired of the painful and hopeless? Why not give meditation a go?! The research is there to back it.

As always, thanks to sciencedaily.com for the scoop.

Next Post: How Do I Overcome Depression and Overcome Anxiety? Hope for Hope

Previous Post: Living with Depression? Coping with Anxiety? A Poem of Hope