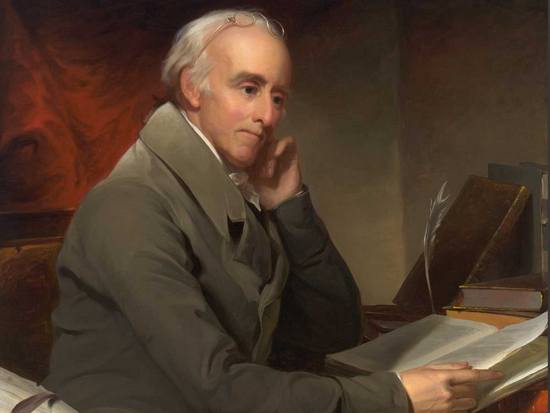 History: a prodigious collection of icons, knowledge, and lessons. And there are thousands of gems to mine. Perhaps you’ll be enlightened and inspired when you get to know Dr. Benjamin Rush, America’s first psychiatrist.

‘Happily, these times of cruelty to this class of our fellow creatures and insensibilities to their sufferings are now passing away.’

Why bother talking about history?


Well, it’s often immensely interesting, as well as educational. And it plays a huge role in defining who we are and why we do what we do.

And would you agree that history is one of the best predictors of current and future behavior?

Okay, point made. Let’s get acquainted with Dr. Rush…

Who was Dr. Benjamin Rush?

Born just outside of Philadelphia on Christmas Eve 1745, Benjamin Rush was a renaissance man.

Physician, politician, humanitarian, social reformer, educator, great husband and father – signer of the Declaration of Independence – what more can one say? Dr. Rush was the total package.

“The Founding Father Who Healed a Wounded Nation”

I’d always thought Rush was an interesting man. So when I saw Dr. Benjamin Rush: The Founding Father Who Healed a Wounded Nation by Harlow Giles Unger on a shelf at Barnes & Noble, I had to have it.

The book is the info source for this piece.

It was the practice of Philadelphia authorities to send the severely “insane,” those who “raised the devil,” to prisons, almshouses, or the Pennsylvania Hospital.

Those who weren’t aggressive or behaving as though they were under the spell of Satan were left to roam the streets.

After visiting a Philadelphia jail in the early-1790s, Rush was infuriated over the brutally cruel conditions and demanded reforms.

Pennsylvania Hospital, founded in 1751 by Benjamin Franklin, was the first hospital to designate specific space for the treatment of those with psychiatric disorders.

But when Rush became connected with the hospital, he found the area nothing more than a filthy basement prison.

Among other atrocities, patients were often chained by their waists to iron rings embedded in the floors or walls of cold and damp cells.

The story goes that Rush went ballistic over the conditions, and the hospital directors wisely turned the care of the “maniacal” patients over to him. 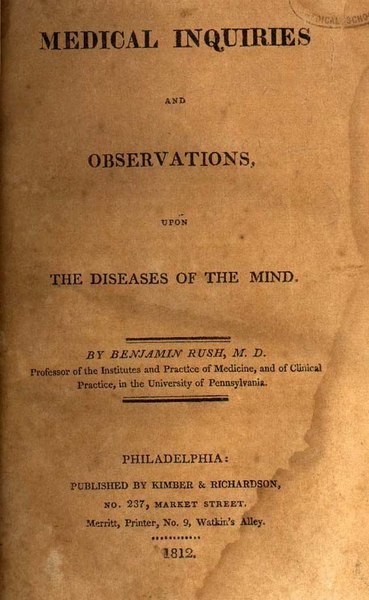 Medical Inquiries and Observations upon the Diseases of the Mind, 1812

Spending endless hours observing and caring for his patients, Dr. Rush came up with a multitude of theories and treatments for the emotional and mental disorders.

For instance, here’s how he described “a new theory of mania” to a colleague in London…

I suppose it in nearly all cases to be accompanied by inflammation of the brain. This, the water, blood, pus, and hardness found in the brain after death all demonstrate.

In consequence of the adoption of this theory, I have lately cured three deplorable cases of madness by copious bleeding (100 ounces in one case). It was aided afterwards by cold baths.

The science of the day

Yes, Rush, along with his medical peers, was huge on bleeding for just about every illness he encountered. And to go along with it were purging (laxatives and emetics), herbal remedies, and painkillers – opium, rum, and whiskey.

But we have to consider the times – medical science was in its infancy. I mean, luxuries such as the stethoscope and thermometer were years down the road.

Rush, like any physician, was only as good as the science of the day.

When it came to cause, Rush declared that “madness” often resulted from “the reciprocal influence of the body and mind upon each other.”

They are part of the unity of disease, particularly of fever, of which madness is a chronic form affecting that part of the brain that is the seat of the mind.

The cause of madness is seated primarily in the blood vessels of the brain, and it depends upon the same kind of morbid and irregular actions that constitutes other arterial diseases.

Regarding treatment, Rush went well beyond bleeding and purging.

He introduced an early form of talk therapy, as well as occupational therapy. Both were revolutionary, as well as effective.

Bottom-line: Dr. Rush became the first American physician to treat emotional and mental disorders as diseases, not willful criminal behavior or the work of the devil or evil spirits.

For many centuries, they have been treated like criminals, or shunned like beasts of prey. Happily, these times of cruelty to this class of our fellow creatures and insensibilities to their sufferings are now passing away.

The clanking of chains and the noise of the whip are no longer heard. They now taste the blessings of air and light and motion in pleasant shaded walks in summer and in spacious entries warmed by stoves in winter.

In consequence of these advantages, they have recovered their long forgotten relationships to their friends and the public.

Dr. Benjamin Rush: an icon. History: to enlighten and inspire.

Please dig in to hundreds of Chipur mood and anxiety disorder info and inspiration titles. All sorts of help awaits.

Next Post: Subtle ways to ask someone twice if they’re fine

Previous Post: “I just want to be happy. Is that asking for too much?”