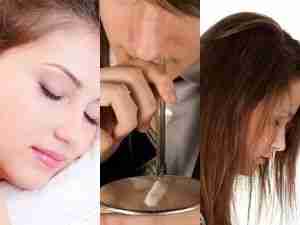 How to get over depression, panic attack symptoms, psychological disorders, how to deal with stress, addiction – and more. I want Chipur to be your reliable information go-to.

I’m always scouting relevant research for those enduring mood or anxiety woes. When I find something Chipur-worthy I typically devote a full article to it. But this go-round I’m bringing you three tidbits (more bang for your buck). Perhaps you’ll find them enticing enough to do some additional probing.

Participants were subjected to mild electrical shocks while viewing two different faces – and smelling a specific odorant for each face. That tied the face/odorant/fear knot. Throughout slow wave sleep, when memory consolidation is thought to occur, one of the two odorants was introduced – sans associated faces and shock. The purpose was to repeatedly reactivate the memory of the face – similar to exposure therapy.

So what do you think? When developed, wouldn’t this emotional manipulation be the frosting on the traditional daytime exposure therapy cake?

So it was the “Chicken or the egg?” dilemma for scientists at the Institute of Living/Hartford Hospital. They scratched their heads and wondered if those who abuse psychostimulants, such as cocaine, are more impulsive and show alterations in brain reward circuits because of their drug use. Or is it a matter of pre-existing abnormalities? (Now, were it the former one could reasonably expect brain “custom-tailoring” to normalize following prolonged abstinence.)

Digging-in, the research team compared neural responses between three groups of people (healthy controls, current drug-abusing cocaine users, former cocaine users who’d been abstinent an average of four years) who were asked to complete a task that resembles bidding on eBay items. The groups were also compared on levels of impulsivity and reward responding.

Well, turns out the active users showed abnormal activation in multiple brain regions involved in reward processing. The abstinent participants who were previously cocaine dependent showed differences in a subset of those regions. Both current and former cocaine users displayed similarly elevated impulsivity measures compared to healthy controls. And that indicates they had a pre-existing risk for addiction.

Cut to the chase? Prolonged abstinence from cocaine may normalize only a subset of the brain abnormalities associated with active drug use. And that’s important to know because the knowledge that some neural changes associated with addiction persist despite long periods of abstinence supports clinical wisdom that recovery from addiction is a lifelong process.

A Test for Suicide Risk? Yep!

According to a new German-Swiss study published in the Journal of Psychiatric Research, blood pressure, blood circulation, and activity in the sweat glands of the fingers can reveal if someone’s suicidal. Oh, and that would be with 97% accuracy.

Catch this. 783 depressed in-patients in Germany were tested for something known as hyporeactivity – reduced ability to react to assorted stimuli. See, a suicidal depressed individual reacts differently to environmental changes, compared to someone not in the same boat.

And that’s confirmed by previous research revealing there’s a strong correlation between hyporeactivity and suicide in depressed people. In fact, it’s been noted that hyporeactivity was present in up to 97% of depressed folks who later completed suicide. All of this said, I want to make sure you know everyone who has hyporeactivity is not suicidal; however, most all suicidal depressed individuals are hyporeactive.

On to the suicide risk test. Hyporeactivity can be measured by an individual listening to a pattern of tones, while body reactions are measured via sensors on the fingers. Virtually all people react the first time they hear a tone – an automatic general orientation reaction. But when the tone is heard again, the reaction decreases amongst – the hyporeactive.

According to one of the study scientists, “A depressed person has a biological inability to care about the surroundings, while a healthy person continues to react.” For the record, the use of the word “healthy” rubs me the wrong way.

Think about it – a reliable test for suicide risk. Is that a true life-saver, or what?

Okay, okay – never at a loss for words, huh?! Well, you can pick and choose what you want to read; and pursue more knowledge if you’d like. Obviously, I find this shtuff fascinating. But it’s more than just that. I’m encouraged by the fact that the research worker-bees are buzzing away trying to find answers – relief and healing strategies – for those enduring trying emotional/mental circumstances. That’s comforting.

How to get over depression, panic attack symptoms, psychological disorders, how to deal with stress, addiction? Whole lotta’ shakin’ goin’ on…

As is so often the case, thanks to sciencedaily.com for the scoops.

Next Post: Intrusive Thoughts? To the Intruder: “The Door’s Open, Come On In!”

Previous Post: Did You Give Your All? Yes? So Opt for “Job Well Done!”