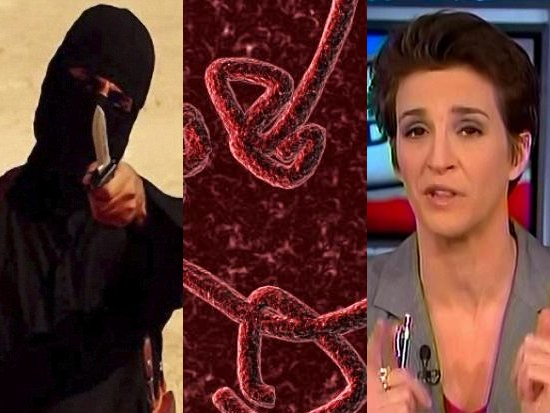 ISIS, Ebola, and the news of the world. Yeah, that’s a big “Oh my!” Major depressive disorder, panic attack symptoms, stress, and more. Is it any wonder they’re flying sky-high? These are treacherous times, and those who lean toward the depressive and anxious likely find them dark and frightening. So I think we need a soothing perspective. And I’m bringin’ it…

Don’t you know by now you catastrophize, overgeneralize, and dabble in all sorts of cognitive distortion? So you have to understand your traditional patterns of thought, and take them into account when stressors crank-up.

Barbarous beheadings, threats of same in the homeland, an Ebola outbreak overseas and an invasion on our shores, and news stories that make us wonder how “human beings” can stoop so low.

These are days for vigilance, to be sure – for anyone. But for those enduring mood and anxiety disorders, perception often calls for more than just being watchful. The reaction may well be it’s time to go into full survival mode, and that can cause all sorts of problems.

10 Thoughts to Soothe Your Frightened Mind

For those of you who are super-struggling with the current state of world affairs, I want to cut right to the chase and help you soothe that frightened mind of yours. Won’t you consider the following?

Yes, we’re in the midst of “Oh my!” times. And that reality holds the potential to exacerbate panic attack symptoms, major depressive disorder, stress levels, and a whole lot more.

But I’m here to help you soothe that frightened mind of yours by bringing reason to the table. You in?

Hey, we’ll get through this, k?

Oops, almost forgot. Please feel free to share some of your soothing thoughts with us in a comment. It’ll be helpful to all…

If you found this piece meaningful, go ahead and check-out 600+ Chipur titles.

Don’t know what end’s up? Would a bit of perspective and direction help? Learn about my consultation services.

Next Post: Acceptance: The Missing Piece to the Healing Puzzle