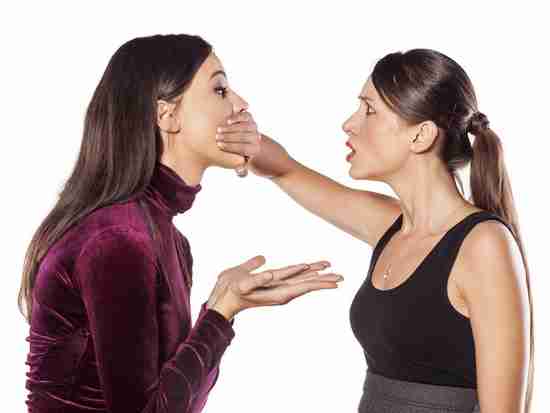 We said it. There was no malice, it’s just what popped-out of our mouth. Still, it hurt. And that’s how it often goes. It isn’t so much the meaning – intent – of what we say that inflicts pain. It’s how we say it…

A great way to start is to stop conversationally labeling people as diseases. So instead of saying ‘Joan is schizophrenic,’ let’s roll with ‘Joan has schizophrenia.’

And when it comes to the emotional/mental disorders, what’s between-the-lines generates and perpetuates stigma.

That has to change.

Let’s get right to work by considering an example. Think about the word “invalid.” merriam-webster.com defines it as “a person who needs to be cared for because of injury or illness.” It’s a noun spoken freely by many.

But what happens when we shift the accent from the first syllable to the second (“invalid”)? For the person requiring care, the word takes on a terribly cruel meaning, doesn’t it? Actually, one that’ll keep me from using it.

Fact is, a person isn’t their illness, s/he has one.

And so it is with emotional/mental circumstances. The words often used hurt – and discourage.

I received a Huffington Post Healthy Living article notification last week that caught my attention. Written by Erin Schumaker, its title is the heading just above. I’d like to discuss it with you. And so I don’t have to repeatedly reference Schumaker, just know what you’re about to read comes directly from her piece (credit gladly given).

Research by the White House Office of National Drug Control Policy indicates loaded words used to describe drug addiction, such as “clean” vs. “dirty,” can actually drive folks away from getting help.

Moving to the emotional/mental health arena, using phrases such as “unsuccessful suicide” serves to gum-up the dialogue surrounding suicide and depression.

And so it’s pretty easy to see how the between-the-lines of it all can make anyone enduring an emotional/mental situation feel stigmatized.

Given the power of the media when it comes to public perception of what we endure – and the fact that reporting involves tough language choices – the American Psychiatric Association (APA) came up with a rubric to help journalists write responsibility about challenges of the mind and suicide.

Here’s what they came up with… 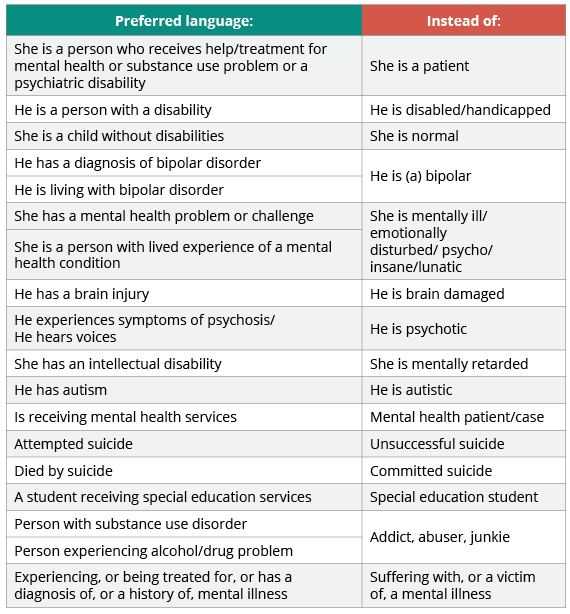 Whatcha’ think? Have you used some of the “Instead of” language? Does the “Preferred language” flow for you? Perhaps you could come up with something more comfortable and natural.

Michelle Riba, MD, clinical professor of psychiatry at the University of Michigan Health System, has this to say…

Words are very important. Let me just say that this is not just for reporters. I think this helps us all think about ways to talk about these issues and communicate.

A great way to start is to stop conversationally labeling people as diseases. So instead of saying “Joan is schizophrenic,” let’s roll with “Joan has schizophrenia.”

The folk at Mental Health America refer to this humanizing sentence construction as people-first language. And it’s all about speaking and writing in a manner that always acknowledges the person first – then the condition or disability.

Newsflash! The person isn’t the disease, s/he just happens to have it.

By the way, that “clean” vs. “dirty” reference above? Dr. Riba points-out that “substance abuse” was dropped from the latest edition of the Diagnostic and Statistical Manual of Mental Disorders. It’s now “substance use disorder.”

It’s about minimizing stigma and increasing the perception of a need for treatment.

Sure enough, words – and between-the-lines – hurt. I don’t have any doubt that most of us mean no harm, but it still happens. So maybe it’s time we gave some thought to what we intend to say, and how it could impact another, before we let it fly.

I, for one, don’t want to be a stigma-generator, or in any way discourage someone from acknowledging their situation and pursuing care.

(Thanks to Huff Post and Erin Schumaker for the article.)

Speaking of articles, how ’bout way more than 600 Chipur pieces?

Lots on your mind? Need some encouragement and direction? Think about a Chipur consultation?