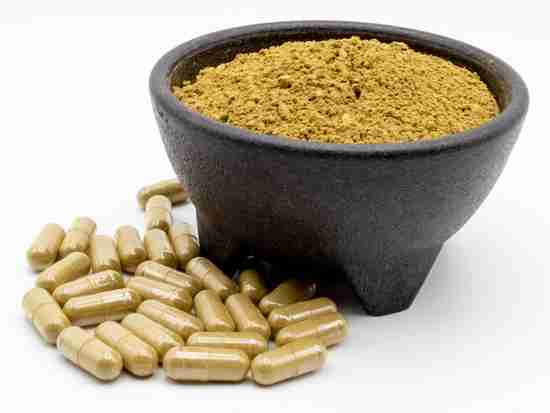 Over the past few years the popularity of kratom has boomed. It’s being used for pain relief, opioid use disorder, health and wellness, and recreation. But what is kratom? Have you heard of it? And what does someone enduring a mood or anxiety disorder need to know? Let’s take a look…

I’m really trying to be objective in my presentation of kratom. Look, it appears to have some great qualities. But the fact is, there are major concerns.

Supplements can play a pivotal role in relieving mood and anxiety disorder symptoms. I use several. However, this supplement biz can become dicey for a number of reasons, including lack of regulation and seductive marketing. Still, who could blame a mood or anxiety disorder sufferer for pursuing a supplement that’s touted to relieve what ails them?

Kratom: What Is It?

Kratom (mitragyna speciosa) is a tropical tree native to southeast Asia. The action is in its leaves, which contain forty-plus compounds. Among them are two alkaloids that act as opioid receptor agonists: mitragynine and 7-hydroxymitragynine. The latter is reported to be more potent than morphine.

Kratom is typically consumed in the form of capsules, pills, or extracts. Its leaves can be chewed or brewed as a tea, and it can be smoked or eaten in food. There are all sorts of varieties available for purchase, which most commonly takes place online. Kratom may also be available in local smoke, vape, and head shops.

Purchasing and using kratom is not illegal at the federal level. However, the US Drug Enforcement Agency lists it as a “drug and chemical of concern,” and word’s out that a Schedule 1 classification is just around the corner. Aside from federal status, kratom is legal in most states. In those that have banned it, kratom has been classified as a controlled substance or regulated drug.

What’s It Used For?

The list can go on and on, but let’s go with kratom largely being used for depression, anxiety, stress, pain, opiate/opioid withdrawal, diabetes, hypertension, inflammation, cough, diarrhea, and more. It’s also used for recreational purposes.

The stimulant effects typically present as increased alertness, ramped-up physical activity, chattiness, and an increase in social behavior. The depressant effects at higher doses vary and are unpredictable. And it’s in this neck of the woods that mood and anxiety disorder sufferers may bump into trouble.

Many users anecdotally report a decrease in anxiety and stress, reduced fatigue, pain relief, and sharper focus. But are those users in the midst of mood or anxiety disorder circumstances?

I’m really trying to be objective in my presentation of kratom. Look, it appears to have some great qualities. But the fact is, there are major concerns. After all, the DEA is looking to restrict it and it’s been banned in eight states, one county, and three cities.

Kratom use can bring side effects such as sedation, nausea, loss of appetite, constipation, dizziness, confusion, liver injury, jerky limb movements, hallucinations, delusions, aggression, muscle and bone aches, and thyroid problems. In fairness, however, the same could be said about antidepressants and antipsychotics. But in large doses kratom may generate breathing issues, brain swelling – and death.

FDA public health advisories in 2017 and 2018 cited the deadly risks associated with kratom use. It seems in many of these cases kratom was used in combination with illicit, prescription, and over-the-counter drugs. There have also been reports of contamination, as well as the possibility of the presence of additives such as caffeine and codeine. There was even a report not even two years ago of a salmonella outbreak attributed to a common source of kratom.

Finally, kratom is well-known to cause dependence when used regularly. And with that can come opioid-like withdrawal effects.

Now, I have to say there are plenty of kratom advocacy groups that want to protect your right to use kratom for legitimate purposes. One of them is the American Kratom Association. Please, if you’re interested in pursuing kratom for personal use, check them out.

So there you have it, a primer on kratom. Again, supplements can play a vital role in the management of the mood and anxiety disorders, and kratom sure seems to possess a lot of desirable characteristics and actions. But, of course, the big question is: Is it safe?

And now it’s time for your due diligence…

Plenty more mood and anxiety disorder-related articles where this baby came from. Eyeball those Chipur titles.

Next Post: How many times have you asked, “Is it the meds…or me?”