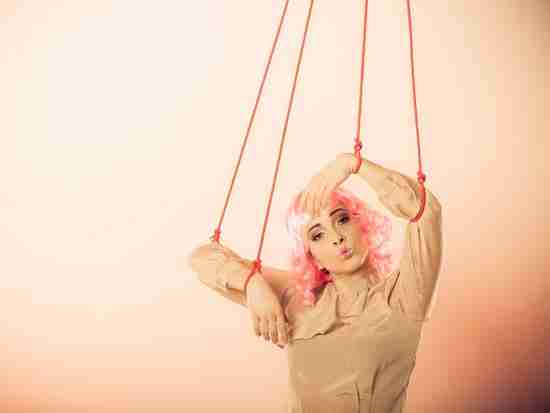 “Why am I depressed?” “Will my anxiety go away?” “Can depression be cured?” Anyone dealing with a mood or anxiety disorder has asked those questions zillions of times. Remedies for pain, that’s all we want. But why bother, if we believe our circumstances are beyond our management? Let’s learn about locus of control…

When it comes to LOC – innie or outie – we’re dealing with a spectrum. Okay, sure, some folk may be high innie or outie; however, having a balance of both isn’t at all unusual…

We can discover and try to implement all sorts of strategies and techniques to remedy our mood or anxiety woes. Dang, how many are there out there?

However, how could any of them help if we don’t believe we have immediate “control” over our very existence?

In other words, it’s useless pursuing interventions if we’re convinced out-of-self forces are responsible for our misery – and relief.

What the Heck is Locus of Control?

In psychobabble, locus of control (LOC) is considered to be a key personality component, the concept developed by Julian B. Rotter in the 1950s. LOC addresses our perception about the primary foundational cause(s) of the goings-on in our lives.

Simply, do we believe our destiny is controlled by internal or external forces?

A powerful question pertaining to why we suffer and the hope for relief, don’t you think?

Let’s begin with a chat about internal (“innie”) LOC…

An individual with internal LOC believes her/his behavior is guided by personal decisions and beliefs.

Those with high internal LOC have confidence in their ability to manage themselves and influence the world around them. The future? It’s perceived as resting in their own hands, and it’s believed personal choices generate success or failure.

Internal LOC, according to Rotter…

The degree to which persons expect that a reinforcement or an outcome of their behavior is contingent on their own behavior or personal characteristics.

Given innies believe in their ability to change things, they tend to be more confident, seeking information that will assist them in influencing people and situations. So, in general, innies are more motivated and success-oriented.

As we age, we tend to become more internal. Guess that’s why middle-age folk lean toward having the highest internal LOC.

On the potential downside, an internal orientation needs to be matched by competence, self-efficacy, and opportunity. All allow the innie to experience a sense of personal control and responsibility. However, when an innie lacks that competence, self-efficacy, and opportunity, degrees of depression and anxiety may come-a-callin’.

Outies believe control over events, and what other people do, is outside of them. Bottom-line, they believe they personally have very little, or no, management over such things. Heck, they may even go so far as to believe others have control over them, and they have no option but to obey.

The degree to which persons expect that the reinforcement or outcome is a function of chance, luck, or fate, is under the control of powerful others, or is simply unpredictable.

Guess it isn’t hard to understand why outies tend to be fatalistic, seeing things as happening to them with very little they can do about it.

It’s this belief that makes outies more passive and accepting. And when they, in fact, succeed, they are more likely to attribute it to luck than anything they did.

Outies tend to back away from activities and events, thinking they really can’t contribute or make a difference.

Keep It in Mind

When it comes to LOC – innie or outie – we’re dealing with a spectrum. Okay, sure, some folk may be high innie or outie; however, having a balance of both isn’t at all unusual – perhaps varying by situation. For example, an individual may be more internal at home, but more external at work.

And it’s really important not to get all polarized about innie vs. outie. It truly isn’t a matter of, say, innie is good, outie is bad.

Finally, though theory and research indicate LOC is largely learned, there is evidence showing LOC is a response to circumstances. So for my money, this says an outie who wants to transition to the innie side of the fence can certainly hope to do so.

And that’s a huge consideration when it comes to desiring and implementing mood or anxiety disorder interventions.

“Why am I depressed?” “Will my anxiety go away?” “Can depression be cured?”

Sure, all we want are remedies for pain. And we deserve them. However, let’s take the time to consider our innie or outieness as we pursue and implement interventions.

Hundreds of Chipur titles just for you. Don’t hesitate.

Previous Post: 10 Life-Changing Truths for Those Enduring a Mood or Anxiety Disorder | Happy 2016!