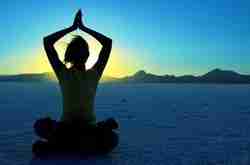 Bringing you a wide variety of points-of-view makes chipur a stronger resource. Presenting guest posts is a great way to do just that.

Here’s one from Jenn Pedde from the University of Southern California’s Online Master of Social Work program. And it provides some great information on the healing power of yoga and meditation for bipolar disorder…

If you or a loved one has been diagnosed with bipolar disorder, you are well aware of the challenges and obstacles that accompany a condition that afflicts nearly six million adults in the United States.

The oftentimes debilitating mood swings can adversely affect every part of your life — at home, at work, at school; any place, any time.

Many who seek medical attention are able to reign back the symptoms of bipolar disorder with mood-stabilizing medications, but sometimes these prescriptions are not enough.

This is why more and more people are discovering the benefits of yoga and meditation as alternative treatment options for bipolar disorder.

Yoga
Yoga is a discipline that comes from ancient India, but has become extremely popular worldwide. While the precise effects of yoga on those who suffer from bipolar disorder have not yet been fully studied, there is a rising number of health care providers who recommend it as a supplement to other treatments.

Yoga is an experience that fuses mind with body in regimented movement and intense concentration. If done with regularity, yoga can cultivate a sense of mental clarity, as the practitioner is able to focus on the shape of their body, steady breathing and balance all at once.

With this increased awareness, a sufferer of bipolar disorder might find relief to chronic stress patterns and be able to promote a sense of calmness that medications do not otherwise provide.

Physiologically, yoga works like any other form of exercise by prompting the body to release mood-enhancing chemicals into the brain, such as endorphins and neurotransmitters. Yoga (especially Bikram Yoga, which is traditionally done in a room at over 100 degrees Fahrenheit) also elevates the body’s temperature, which is believed by some to increase feelings of calm.

Meditation
The art of meditation involves self-inducing mental states of consciousness through focus and breathing exercises. Most practitioners meditate with a certain goal in mind (e.g. to calm their nerves, attain a spiritual moment or simply relax), and many people with bipolar disorder meditate in hopes of managing their mood swings.

There are many forms of meditation, ranging from seated to walking, from silent to chanting. Nearly every major religion has a tradition of meditative practices, and some even require ritual meditation. Practicing meditation means staking claim to your mind and your mood by maintaining an extended state of focus and calm.

Like yoga, there is no definitive scientific study on the physiological benefits of meditation but there are many doctors and psychiatrists who have begun to recommend it to complement other treatments. They have done so because findings suggests a direct link between the focus and calmness aspired to during meditation and certain biophysical reactions in the brain.

Many hold that meditating can physiologically influence your brain activation for the better.

Together, practicing yoga and meditation represents an ability to master both your body and your mind. Knowing this can make all the difference in the world in managing your bipolar disorder.

If you know you have the power to take control of your body and your mind through yoga and meditation, you can also believe that you can take control of bipolar disorder.

Jenn Pedde is the community manager for the University of Southern California’s Online Master of Social Work program.  She spent 2.5 years teaching in South Korea, and now helps students achieve their dreams of earning an MSW degree from one of the nation’s leading MSW programs.