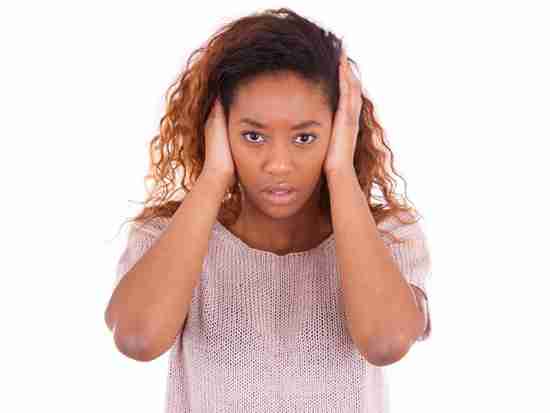 Sounds can be wonderful. Sounds can be toxic. Most anyone feels the invasion of an obnoxiously noisy motorcycle, jackhammer, or thumping car stereo. But when the sound of chewing, foot shuffling, or crinkling food packages becomes troublesome, there may be a problem. Let’s learn about misophonia…

Our friend is experiencing signs of misophonia, but she doesn’t know it. The sound of the barking dog across the hall was always annoying. But now it’s making her intensely anxious and angry. She knows something’s wrong – but what?

Never fails: those of us who endure the mood and anxiety disorders always seem to be the ones who experience funky conditions that most people, including us, have never heard of. As unfair as it is, it’s all too real.

With the assistance of the Misophonia Institute and recent research from Newcastle University, we’re going to learn about one such funky condition. Let’s dig into misophonia…

We’ll get some help from the Misophonia Institute, as we paint this picture. Misophonia, literally “hatred of sound,” is a condition where a person has a severely adverse reaction to specific soft sounds and visual images. The reaction is intensely emotional, so hate, anger, anxiety, rage, resentment – even physiological distress – may appear on the scene. The person experiencing misophonia may even believe the sound is being made intentionally, coming to understand it isn’t when they’re away from it and calmer.

It’s important to know that misophonia isn’t a hearing impairment. Indeed, those with misophonia typically have excellent hearing.

Misophonia was first proposed by Dr. Pawel Jastreboff and Dr. Margaret Jastreboff twenty years ago. But go figure, it still isn’t recognized as a diagnosable condition. The sad reality is it’s traditionally gotten very little attention. So little, in fact, that the prevalence of misophonia is unknown, though it’s been estimated to be 6-20% of any population. Do the math.

The same mystery applies to how sex, gender, and age may affect the likelihood of having misophonia. 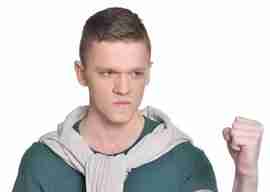 “One more slurp. Even a quieter slurp, and I’ll have something to say about it.”

Common triggering sounds for people with misophonia are generated by others, as well as what’s going on in their environment. Triggering sounds include chewing, crunching, slurping, others talking, kids screaming, cellphone ringtones, crinkling food packages, lawn mowers, leaf blowers, music and TV through walls, dog barking, foot shuffling, and flip-flops.

But here’s just one of misophonia’s curious characteristics. Assuming the sound of chewing is a trigger. If it’s a friend doing the chewing it may only be an annoyance. However, if it’s, say, a parent, the sound may be intolerable and the reaction intensely negative.

Misophonia is a troubling condition, no doubt – but fascinating. And you’re about to see it’s getting more attention.

When it comes to the cause of misophonia we’re going to rely upon exciting new research from Newcastle University. The lead author is Dr. Sukhbinder Kumar and the work was published in the Journal of Neuroscience.

Let’s begin with a statement from Dr. Kumar…

“Our findings indicate that for people with misophonia there is abnormal communication between the auditory and motor brain regions – you could describe it as a ‘supersensitised connection.’ This is the first time such a connection in the brain has been identified for the condition.”

According to the research team, in response to a trigger or neutral sound, scans on study participants with misophonia showed that the brain’s auditory cortex (hearing center) responded similarly to participants without the condition. However, those with misophonia showed increased communication between the auditory cortex and motor control areas related to the face, mouth, and throat.

What really surprised Dr. Kumar and the team was finding a similar pattern of communication between the visual and motor regions. The indication is misophonia can also occur when triggered by a visual.

“This leads us to believe that this communication activates something called the ‘mirror system,’ which helps us process movements made by other individuals by activating our own brain in a similar way – as if we were making that movement ourselves.”

Given the evidence, Dr. Kumar and team submit that in people with misophonia, involuntary overactivation of the mirror system leads to some kind of sense that sounds made by other people are intruding into their bodies – outside of their control.

Within this context, the team believes some people with misophonia can lessen their symptoms by mimicking the action generating the trigger sound. Doing so could well be perceived as a restoration of control.

This is amazing, isn’t it?

How is misophonia treated?

As we begin to discuss misophonia treatment, let’s keep in mind what we just discussed. The dynamics of mimicking the action generating the trigger sound, according to the research team, may likely be used to develop new misophonia therapies. Makes sense to me, and it’s very hopeful. Heck, if you’re struggling with misophonia, why not give it a go?

And the team emphasized the importance of taking into account motor areas of the brain, along with sound centers. That would have positive treatment impact as well.

The Misophonia Institute reports that cognitive behavioral therapy (CBT) has been successfully applied to misophonia. They go on to state that more and more research is targeting the condition, which, of course, provides greater understanding. Because of that work a hypnotherapy protocol known as Sequent Repatterning is available. And a stress management and carefully designed exposure technique has been introduced in a study by Fordham University.

Keep your chin up

Sounds can be wonderful. Yes, sounds can be toxic. If you’re wrestling with misophonia I’m thinking the latter dominates your life. And what’s so tragic is, until reading this piece you may not have known what you were dealing with, or that it’s a legit medical condition – even though it still isn’t recognized as a diagnosable disorder.

But keep your chin up, I think change is in the works. Misophonia is getting a lot of well-deserved attention, and that can only bring relief and hope.

Be sure to visit the Misophonia Institute website. Lots to absorb. And here’s the Newcastle University press release on their misophonia research.

Do yourself a favor and peruse the hundreds of Chipur titles. All sorts of things to learn.