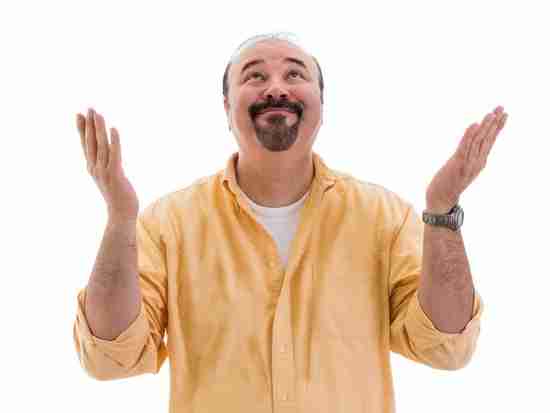 Living with a mood or anxiety disorder is pretty much a thankless job. Wouldn’t you agree? But that doesn’t mean the concept of gratitude has to be forgotten. In fact, gratitude can sure come in handy, especially when life is hell. Yes, really…

But I have to counter with the fact that there absolutely is at least one reality for which you can feel and express gratitude. And if you’re still in stall, I’m going to ask you to try harder.

A little over 34 years ago I dragged my sorry keister to a substance treatment center and 24 hours later checked-in. Go figure, I finally came to grips with the fact that alcohol was doing me in.

For those of you who’ve traveled in those circles, you know there’s, shall we say, a cultural lingo. I mean, there are all sorts of words, expressions, and concepts that can be attributed to either Alcoholics Anonymous (The Big Book) or Twelve Steps and Twelve Traditions.

The following appears in the discussion of Step Ten – “Continued to take personal inventory and when we were wrong promptly admitted it.” – in Twelve Steps and Twelve Traditions…

An honest regret for harms done, a genuine gratitude for blessings received, and a willingness to try for better things for tomorrow will be the permanent assets we shall seek.

That appears to be the origin of the gratitude emphasis in AA culture.

During my time in “rehab,” as well as the first year or so of AA meeting attendance, I didn’t have the maturity to receive and absorb the concept of gratitude, much less express it.

I mean, really? I can’t do the one thing that keeps my anxiety at bay and you people want me to have gratitude? You have to be kidding. And isn’t it curious that I referenced “you people” in those days, not me.

Funny story: I was sitting at a meeting “table” a little over a month after discharging from rehab. It was just before Christmas. Going around the table, it was my turn to share. So I offered-up a whiny, feeling sorry for myself mess about how unfair it was that it was the holiday season and I couldn’t drink.

When I finished, the rather tough-looking AA vet sitting next to me elbowed my arm and motioned me to come close. I leaned my head over and she whispered, “Tough sh**, you can’t.”

And so began my maturity and enlightenment journey, the commencement of my grasp of gratitude.

So why would you, me, or anyone wrestling with a mood or anxiety disorder want to embrace gratitude?

Well, the way I see it, for most folk it’s very likely the one personal intervention they’ve never tried. Seems to me that alone gives it a pretty tall chance of success.

Then there’s the spiritual tone that practicing gratitude creates. It’s just simple, good, honest, and right. And for someone living within the pain and tumult of an emotional/mental disorder, a spirit of gratitude is a wonderfully soft and soothing overlay.

Well, if we’re going to go the gratitude route it seems we’d better find a thing or two to be thankful for. And don’t think for a second that I wouldn’t understand if you, in your suffering state, can’t come-up with anything. But I have to counter with the fact that there absolutely is at least one reality for which you can feel and express gratitude.

And if you’re still in stall, I’m going to ask you to try harder.

Look, maybe it would help if I shared a very short list of what I’m thankful for – things that really hit deeply and create that spirit I described. Let’s go with my spiritual relationship, children, grandchildren, and home. And I’ll add one more that may cause you pause…

In many ways I’m thankful for my emotional/mental history and present circumstances. It’s true.

Okay, at times I’m not exactly thrilled with my anxiety and associated mood symptoms. And that’s the downside. However, there’s a huge upside. Were it not for the way I’m wired I wouldn’t be half as creative as I like to believe I am (and that means there wouldn’t be a Chipur and more to come). And my “outside-the-box” approach to life wouldn’t exist.

One more thing. There’s no way I could have developed a heart for helping those enduring their own emotional/mental challenges. That, of course, means I wouldn’t have become a counselor. So much, then, for my life’s meaning – its purpose.

Much more on the upside, by the way. But with what I’ve shared, are you ready to give gratitude a go?

No doubt about it, living with a mood or anxiety disorder is way too often a thankless job. And so it’s easy to understand why the concept of gratitude flies right by us.

But we can’t let that happen because gratitude and its expression bring so much to our often tired and tattered worlds.

Though I’ve endured more than my share of emotional and mental hell over the many years, I have no idea what you endure. Sitting in the dark with your depression, flying high with your mania, or pumping adrenaline with your anxiety, feeling any measure of gratitude may seem impossible.

All I can do is encourage you to search for even a morsel to hold onto, even if it means downright forcing what you perceive to be pointless. Maybe it won’t always be like that…

I’ve spent the better part of a decade writing articles to help mood and anxiety disorder sufferers. I’m inviting you to consider hundreds of titles.

Next Post: Trichotillomania: What You NEED to KNOW, One Strand at a Time