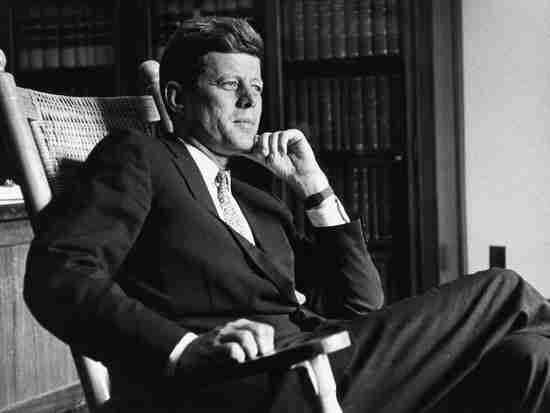 Those of us who wrestle with a mood or anxiety disorder endure way more misery than the average Joan or Joe. I mean, there’s the disorder(s) itself, and you can heap-on all sorts of associated aggravation. So I say each of our lives are “profiles in courage,” whether we realize it – or not…

Incredibly, JFK was administered the last rites of the Roman Catholic Church three times. And that doesn’t include the final sacrament and prayers, in Parkland Hospital’s Trauma Room 1 after being mortally wounded…

But to get the panoramic view, let’s add what often comes in the wake of those symptoms. Things like medical issues, financial troubles, lost and scarred relationships and families, school failings, and work interruption.

For millions of mood and anxiety disorder sufferers the misery is a nightmare that invades their existence several times on any given day. And somehow, some way, the vast majority move-on with their lives.

Profiles in courage, no doubt.

I’m guessing you know that the man in our featured image is John Fitzgerald Kennedy (JFK), the 35th President of the United States. The photo was taken in his Senate office in 1959. Even if you don’t appreciate his politics and some of his personal behavior, he really was a shining light in so many ways.

JFK will always be a fixture in my mind because, as a boy, I was deeply impacted by the near world-ending Cuban missile crisis, as well as his assassination. The latter being a “do you remember where you were” event.

Now to our title. In 1957 JFK wrote the Pulitzer Prize winning book, Profiles in Courage. Interestingly enough, it contained short-bios about the bravery and integrity of eight US Senators – not his particular courage profile.

But let me tell you, the difficulty he endured through much of his life is book-worthy. Actually, I believe the same applies to us.

As we approach the assorted life issues JFK had to overcome, we’re going to limit our discussion to his medical woes.

Likely the most obvious, JFK lived with near-constant excruciating low-back pain, which is thought to have originated in his college years, and exacerbated during the destruction of the PT boat he commanded in World War II. Questionable treatment, including surgeries, only made matters worse.

Notice he’s sitting in a rocking chair in our featured image. It was one of his only means of staying relatively comfortable. And he wore a heavy, corset-like brace that extended from his chest to below his waist.

But there’s more. JFK suffered from autoimmune polyendocrine syndrome type 2 (APS-II), which generated his hypothyroidism and Addison’s disease. The Addison’s had to be closely monitored, not only to manage troubling symptoms, but to keep it from killing him. And that meant injections of hydrocortisone and testosterone. Add to that his use of antispasmodic drugs to keep his chronic colitis and diarrhea at bay. And then there were those pesky UTIs.

Incredibly, JFK was administered the last rites of the Roman Catholic Church three times. And that doesn’t include the final sacrament and prayers, in Parkland Hospital’s Trauma Room 1 after being mortally wounded on November 22, 1963.

So What’s That to Us?

You may have noticed nothing’s been said about JFK having a mood or anxiety disorder. As far as I know, he didn’t. But it doesn’t matter, because I say what JFK chose to deal with medically is no different than the one-ton burden we elect to manage. And let’s not forget that our circumstances are also medical at their foundation.

Given all he endured, I just find JFK someone to whom I can relate – that fighting spirit amidst incredibly painful circumstances.

I mean, consider this. The Cuban missile crisis began on October 16, 1962. Trust me, it’s not an exaggeration that the nuclear destruction of the US, the Soviet Union – much of the world – was at stake. For thirteen days JFK, and his national security team, worked virtually around the clock to, well, save the world.

Here’s just one of the observations about JFK in the midst of the crisis: “He is bone tired, running on a hidden reserve of energy. His aching body is in a state of chaos.”

His wife, Jacqueline Bouvier Kennedy, had no idea how much longer JFK could go on. She noticed how awkwardly he slid himself into his rocking chair. And she remembered how his Addison’s disease almost killed him fifteen years earlier. She also recalled how a coma-inducing post-back surgery infection almost took him. Seriously, how much does he have left?

But with tenacity he pushed back and continued forward motion. Had he retreated to his bed, which would have been understandable, it really could have meant the end of the world.

But that’s what so many of us do, right?

Given all we endure – day after day – we need to identify with people of whom we can be proud and who can inspire us. And that’s because we understand their pain and victory. What better choice than someone like John Fitzgerald Kennedy.

I believe his life is a profile in courage, just like each of ours. Will you believe the same?

A portion of what I’ve shared, including the only quotation, comes from an outstanding book, Killing Kennedy: The End of Camelot, by Bill O’Reilly and Martin Dugard. If you’re into bios and history, the “Killing…” series is top-notch.

I love writing for you and I’d love for you to read any of the hundreds of Chipur mood and anxiety disorder-related articles. Here are the titles.

Next Post: “They tell me I have bipolar 2. So, antidepressants…yes, no?”

Previous Post: The Solar Plexus: What You Need to Know About the Third Chakra