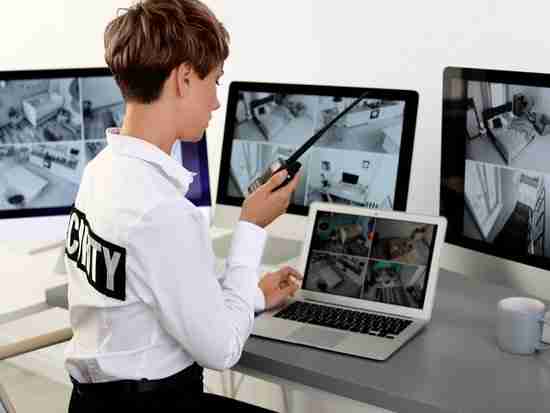 If you’re enduring panic and anxiety, your limbic system is taking advantage of you. “Okay, so what is it, anyway?” I’m glad you asked because that’s exactly what we’re going to talk about. It’s important…

…it’s commonly accepted that what we perceive as fear is produced by a very sophisticated two-way input system.

Decades ago, as I gained insight into my mood and anxiety disorders, learning all I could about the anatomy and physiology of what my mind and body were up to was comforting.

We have a lot to cover, so let’s get after this paradox of protection…

What is the limbic system?

Located in the brain, the limbic system is all about the memory and motivation components of emotion. Though it’s comprised of numerous deep brain structures, we’re going to stick with its stars: the amygdala, hippocampus, and hypothalamus.

The limbic system also communicates with the prefrontal cortex, the executive function – decision-making – portion of the brain.

Now to the stars…

The amygdala, one in each brain hemisphere, is an almond-shaped structure approximately one-inch long. It’s located just a few inches in from the ear, in a direction toward the forehead. The name amygdala is from the Greek: “almond-like.”

The primary functions of the amygdala are memory processing, decision-making, and generating emotional responses – including fear, anxiety, and aggression.

The amygdala moves into vigorous action in response to threatening sensory input, real or perceived. Indeed, as the amygdala is stimulated electronically in the lab, there is an aggressive response.

Taking it to the extreme, if the amygdala is removed, rage response falls by the wayside. Fear and sexual responses go out the door as well.

And how ‘bout this? The amygdala has the most structural variance between genders of any brain component.

The hippocampus is a crescent-shaped structure that in cross section resembles a seahorse. It curves in an upward direction toward the back of the brain from the amygdala. We have two of them as well. 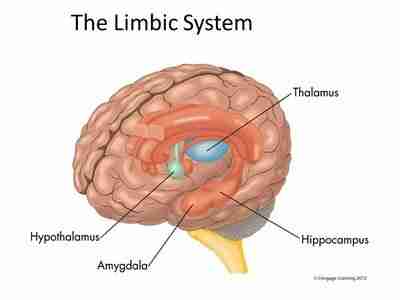 The word hippocampus comes from the Greek hippos: “horse” and kampi: “curve.”

The hippocampus has the task of forming event-induced memories, converting them to long-term memories.

Don’t ever downplay the role of the hippocampus as it applies to memory and emotional reaction. Remembering threatening events, people, etc. gives us a huge leg up on responding to future threats. In fact, that’s memory’s foundational purpose.

The hypothalamus, almost the size of an almond, is located above the amygdala and hippocampus, and below and in front of the thalamus. The word hypothalamus comes from the Greek hypo: “under” and thalamus: “chamber.” Of course, being located under the thalamus had some influence.

The hypothalamus maintains the body’s internal balance – homeostasis. It makes sense, then, that it controls functions such as body temperature, hunger, thirst, fatigue, sleep, and circadian rhythm. It also plays an important role in how we express defensive behaviors.

The most powerful observation regarding the hypothalamus’ role in the limbic system is it’s the link between the endocrine and nervous systems. Without it, we’d be in deep weeds.

The limbic system in action

Though our fear circuitry isn’t fully understood, it’s commonly accepted that what we perceive as fear is produced by a very sophisticated two-way input system.

Here’s how it works…

Sensory input passes through a gateway in the brain, a messenger hub if you will, called the thalamus. Its main function is to transmit its received sensory data to the thought and logic centers of the cerebral cortex, more specifically the prefrontal cortex. However, it has other communication partners.

When input from our senses of sight, sound, taste, and touch reach the thalamus, and specific cues are analyzed, a fork in the road presents. One avenue leads directly to the amygdala, while the other takes its time and heads toward the prefrontal cortex. And each destination generates very different responses.

You may have noticed I left out our sense of smell. That’s because its input skips the thalamus, hence the prefrontal cortex, and shoots straight to the amygdala.

When the amygdala receives a message, it’s engineered to react – no questions asked – by initiating an intense physical response put into motion by activation of the HPA axis (“H” for hypothalamus). That leads to the secretion of cortisol, which flips the switch on norepinephrine (noradrenaline), and our fight/flight response gets rolling.

Now you know why the hypothalamus’ role as the link between the endocrine and nervous systems is crucial.

So this is the physical manifestation of fear those dealing with panic and anxiety know all to well. See, the amygdala doesn’t care if it’s right or wrong, justified or not – it receives input and fires.

By the way, the amygdala also sends messages to the brainstem to facilitate required adjustments to heart rate and respiration in response to fear and stress.

After the initial sensual onslaught hits home, the slower sensory messages from the thalamus finally reach the prefrontal cortex. Again, it’s responsible for executive functioning – the mental ability to receive and interpret information and formulate decisions. 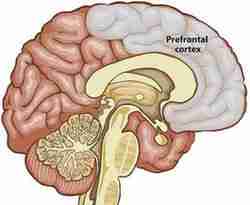 As this occurs, conscious and rational thought regarding the events at hand is generated.

Yes, it’s in the prefrontal cortex that fear stimuli are logically analyzed in great detail. The final assessment is sent to the amygdala.

However, the prefrontal cortex has to remain on high alert, doing its best to ensure assessment accuracy. And that’s because it communicates with the areas of the brain associated with pain, pleasure, anger, aggression, and panic.

Indeed, there’s a lot at stake. And when it’s all said and done, the amygdala ultimately takes its version of appropriate action. If it’s convinced no threat exists, that can include the restoration of calm.

Think about what a marvelous system this is. I mean, the amygdala – the entire limbic system – has its fear message and is prepping the body for immediate action.

It’s taking no chances as it elects to err on the side of caution. And always keep in mind that evolution brought us a genetic makeup that leans toward the anxious. It’s safer, don’t you think?

Well, after the amygdala sends its message, the prefrontal cortex takes time to evaluate the exact nature of the threat. If it decides there isn’t one, it advises the amygdala to chill.

Again, what a marvelous mechanism this is. However, there’s a major drawback. In the face of fear, the amygdala is the dominant limbic system player. And once it starts beating the drum, it’s really tough for the prefrontal cortex to convince it to knock it off.

And without practiced intervention it really doesn’t stand much of a chance. That‘s what paves the way for misinterpretation of sensory input, leading to overreaction to truly harmless stimuli. And that’s at the very core of panic and anxiety.

The limbic system: it provides marvelous protection, yet often causes trouble by taking advantage of us. That’s the paradox of protection.

Got your money’s worth on this one, didn’t you? Well, if we’re going to do it right, important information takes time to present.

But now you know about the limbic system – how it protects and how it can wreak havoc. That gives us an advantage in our wrestling matches with panic and anxiety.

For more on the biological contributors to panic attacks and anxiety, check-out The HPA axis and panic/anxiety: What you need to know.

And the hundreds of Chipur mood and anxiety disorders info and inspiration articles patiently await.