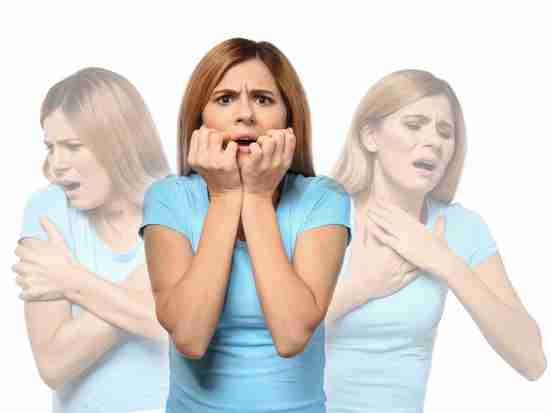 If you’ve ever had one (or thousands), you know panic attacks are out-of-body scary. When they consumed my life decades ago, I wanted to learn all I could about them, especially their cause. I came across something very interesting and helpful that remains valid and valuable to this very day. Let’s roll up our sleeves…

Close relatives of panic sufferers will also panic during carbon dioxide inhalation, even if they have never suffered from an anxiety disorder.

Correct and efficient breathing is vitally important to a panic sufferer. Within that context, we have to address hyperventilation: excessive rate and depth of respiration, which often results in hypocapnia: reduced concentration of carbon dioxide dissolved in the blood.

I’m betting you’ve experienced the manifestations of hyperventilation/hypocapnia: fast and choppy breathing, lightheadedness, dizziness, jelly-legs, tingling in your hands, feet, and lips. Heck, you may have even passed-out.

Sounds to me like the perfect setting for panic attacks.

Hyperventilation: The Happenings In Panic Sufferers

(We need to insert a biological reality into the equation. Hyperventilation generates a build-up of lactic acid (lactate) in the brain, which can generate panic attacks. Much more on this in a short.)

Okay, so now a panic sufferer is really feeling the symptoms as carbon dioxide levels crash. At this point, it’s all about overreaction, which only makes the symptoms and snowballing effect worse. And on comes misinterpretation, leading one to believe a legitimate panic event is at hand. When that happens – boom – it’s off to the races.

But keep in mind, the panic attack was caused by overreaction to, and misinterpretation of, a constellation of biological symptoms. So, really, this is psychological in nature. But maybe it’s biological because of the relationship between panic and lactate. Dang, this psychology versus biology bit can get dicey.

Regardless, researchers who heavily support the role of hyperventilation in the generation of panic argue that panic sufferers are actually chronic “hyperventilators” who seriously sabotage their breathing effort, breathing themselves into trouble during stress and anxiety.

“Panic Attacks as a Problem of pH”

I’d like to blend-in the thoughts of Dr. Richard Maddock, professor of psychiatry at the University of California, Davis, from his article “Panic Attacks as a Problem of pH.” It appeared in Scientific American.

I think you’ll find his insights interesting and helpful, and they’ll fill in some gaps for us.

Dr. Maddock features a 2009 study from the lab of Dr. John Wemmie at the University of Iowa, which he believes may reveal an important new clue to the underlying cause of recurring panic attacks.

Maddock supposes it may well be all about a problem of pH, specifically acidity at key junctures of the brain.

Okay, I’m pretty sure you know that a structure in the brain, the amygdala, is a dominant player in the neural circuits that control what we know as fear – instinctive and learned. Well, Wemmie’s study shows acidity has an essential role in fear.

So it seems large increases and decreases in brain acidity can wreak havoc on brain functioning, particularly neuronal synapses. That being the case, some synapses include specialized proteins that sense acidity and stimulate neurons when increased acidity is detected. They’re called acid-sensing ion channels (ASICs).

Wemmie’s study showed that lab mice lacking these specialized proteins have a greatly reduced capacity to manage both instinctive and learned fear. And when researchers restored the proteins in the just the amygdala, a normalization of fear behaviors was observed.

So according to the study, the ability to detect changes in synaptic pH in the amygdala is essential for normal fear behavior.

Well, what do you know. Wemmie’s study examined carbon dioxide’s role in panic. See, carbon dioxide acts like an acid in the body and brain. Wemmie conducted several experiments that showed the inhalation of elevated concentrations of carbon dioxide triggered strong fear reactions in “normal” mice.

This is relevant to panic sufferers because one of the most consistent findings is, yes, our unusual sensitivity to carbon dioxide inhalation and other lab procedures that increase brain acidity. How ’bout this? Most panic sufferers will experience an attack when they inhale air containing 35% carbon dioxide. And most who don’t deal with panic, won’t.

More! Close relatives of panic sufferers will also panic during carbon dioxide inhalation, even if they have never suffered from an anxiety disorder. Wow! So it looks like a hypersensitivity to acid in the brain is part of an inherited vulnerability to panic attacks.

Previewed it earlier, but with Dr. Maddock’s help, let’s get back to lactic acid (lactate). Panic sufferers tend to generate excess lactic acid, a product of glucose metabolism, in their brains. Lactate is constantly being produced and consumed during brain activity. Thing is, though, if it accumulates it’ll make the brain more acidic.

Uh-oh, studies have shown that panic sufferers build-up excess lactate during normal mental activity – on an ongoing basis. And Wemmie’s study suggests that one of the triggers for out-of-nowhere panic attacks in panic sufferers might just be lactate accumulating in acid-sensitive fear circuits.

The real drag here is it’s unlikely any of the current treatments for panic specifically act on the underlying genetic vulnerability in panic sufferers, as none of them impact the responses of acid-sensing proteins in the brain.

However, there are alternatives. For instance, one of the many pluses of aerobic exercise is that metabolically active tissues (brain included) become more efficient at consuming – removing – lactate. And that’s one of the reasons why there’s evidence showing that exercise training has powerful anti-anxiety and anti-panic effects.

Phew, that was a longie. But it’s really important to deeply understand the causes of what we endure. I mean, how can we develop relief strategies if we don’t know what’s going-on?

Well, let’s wrap it up with the words of Dr. Maddock…

“Already, even with those treatments still only on the horizon, people with panic disorder, like my patient, may find some comfort in the mounting evidence that what they experience is not just ‘in their head’ – it is in their acid-sensing ion channels.”

And please check-out the hundreds of Chipur mood and anxiety disorder-related titles.

Next Post: Relaxation-Induced Anxiety: What & Why You Need to Know

Previous Post: 10 Living with a Mood or Anxiety Disorder Nuggets from a Seasoned Manager