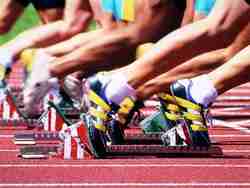 So we all know the new year began yesterday. But I decided to give you the holiday off before issuing a call to action.

Well, here we stand at 2012’s starting line (actually a day late); and it’s time to decide whether or not you’re in the race.

And your answer is?

Look, these days anyone may well need a few buckets of inspiration and motivation to smack a new year head-on.

But I’m thinking someone enduring depression, anxiety, or bipolar disorder may require a more, shall we say, assertive kick in the keester at the dawning of a special opportunity.

So here I am wearing size 11 boots!

The dawning of a brand new year is akin to a fresh new morning.

I encouraged chipur readers to consider quite a few things as they anticipated and began 2012. I’m not going to chew my cabbage twice, except to re-emphasize these five points…

I would sure think swirling around even one of the above would somehow motivate and inspire you to burst into the self-improvement/recovery race for 2012.

But you know what? Such may not be the case – and that’s okay (for now).

You’re just going to have to muster a bit of blind faith. And then you’re going to have to take someone’s word (mine) that your stamina, interest, and progress will snowball (seasonal, you know) if you’ll even slowly move forward from the starting line.

Would you like to read more chipur Feelin’ Better articles (and who wouldn’t)? Then tap right here.