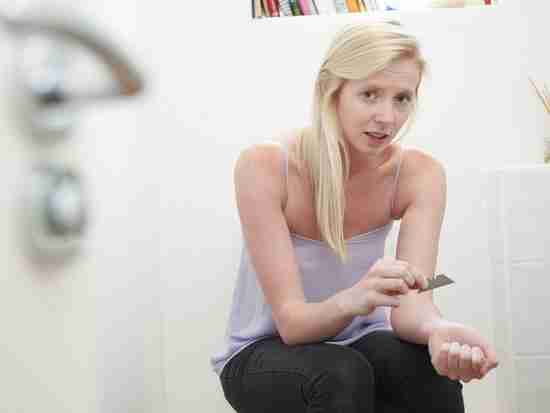 Self-harm and substance use disorders are brutal reality for millions, including loved ones and friends. I haven’t mentioned them much here on Chipur; however, that’s been remedied thanks to a wake-up email. Cool thing is, the sender provided the content…

In more cases than one might imagine, self-harm and substance use disorders go hand in hand. Many who self-harm turn to substances as a means of relief, and vice-versa.

So the email bug has bitten again. Received one some time ago from the blog producer at Harbor Village, Miami, a substance use disorder treatment facility.

Now, I frequently receive emails from treatment center reps scrounging for guest post opportunities, and I decline 99.9% of the time. I mean, it’s just too “markety.”

But I entertained JessiRae’s request because I knew I needed to feature some well-considered self-harm and substance use disorder content. Oh, and she pointed-out that one of Harbor Village’s missions is to stomp stigma and provide education and actionable advice to the struggling among us.

But you know what really closed the deal? JessiRae told me self-harm is her “personal demon.”

So I’m going to get out of the way and let JessiRae takeover, with my thanks…

Self-Harm and Substance Use Disorders: Connections

If ever there were two things society does not want to talk about, self-harm and substance use disorders are definitely towards the top of the list – and it’s a grave injustice to the people struggling through both.

In fact, those engaging in self-harm and those enduring substance use disorders may share underlying causes. Both instances (or habits) of self-harm and substance abuse manifest as a desperate attempt to quell internalized conflict and outward strife.

In more cases than one might imagine, self-harm and substance use disorders go hand in hand. Many who self-harm turn to substances as a means of relief, and vice-versa.

Self-harm and substance use disorders are legitimate issues (sadly, have to emphasize) that often require extensive therapy. Those who no longer actively self-harm may immediately turn their thoughts to, say, cutting in times of stress, and are prone to relapse just like those with a history of a substance use disorder.

Self-harm typically includes cutting, biting, burning, head-bashing, skin-picking, incessant scratching, hitting oneself, and poisoning. And if you think about it, what is a substance use disorder if not a slow and sometimes willful poisoning of the body?

Instances of self-harm and substance use disorder co-occurrence require specialized treatment to get to the bottom of each condition, which may take-on separate lives. It’s possible to treat one, but neglect the other.

Without proper treatment of both conditions, relapse of either is more likely if one considers self-harm as a precursor for substance abuse, or vice-versa.

Those who turn to cutting are often considered either suicidal or attention seeking. This is not the case. Cutting does not equate to suicidal behavior. Akin to taking addictive drugs, cutting (or other outlets of self-harm) helps those engaging in the behavior feel better and cope with their emotional turmoil.

This is one of the more difficult presentations of cutting to understand, as it is counter-intuitive and “perverses” our primal instincts for self-preservation.

Cutting serves as a release for emotions one is otherwise unable to express. Many engage in self-harm (or are more susceptible to it) because they are not effective communicators. This is also true for those with substance use disorders.

Those who assert self-harm is a cry for attention cause irreparable damage in many cases. This notion has created stigma surrounding those who self-harm – those who are ultimately unable to admit to their problems, obscured in the secrecy of clothing.

Because those who cut do not wish to be branded as “attention seeking,” it’s common for families, friends, and loved ones to have no idea what’s going on.

In fact, those who cut need to be heard, but are often unable to speak up for themselves or seek the help they need because the guilt of cutting is too great, and often leads to more mutilation. This thought pattern mirrors substance use disorders.

Many who cut feel the need to punish themselves, because they feel they are unworthy of love, merit, or consideration (yet another key facet of substance use disorders).

Self-mutilation and substance use disorders require careful treatment and empathy. Because both disorders are frowned upon publicly, many will go without treatment and continue their habits – until a slip of the knife too deep or an accidental overdose.

And There You Have It

Thank you, JessiRae. Your contribution is really appreciated.

No doubt, Chipur readers, self-harm and substance use disorders are brutal reality for millions, including loved ones and friends. And given their frequent association with the mood and anxiety disorders, Chipur needed JessiRae’s content.

I’m glad we finally started the conversation. And if you’d like it to continue, go ahead and comment…

Be sure to check things out over at Harbor Village, including JessiRae’s blog.

More Chipur mood and anxiety disorder titles? Hundreds are just a click away.

Next Post: The Benzodiazepine Dilemma: Man, I thought long and hard about posting this.

Previous Post: Socratic Questioning: Demand, and Use, It to Annihilate Your Depression and Anxiety