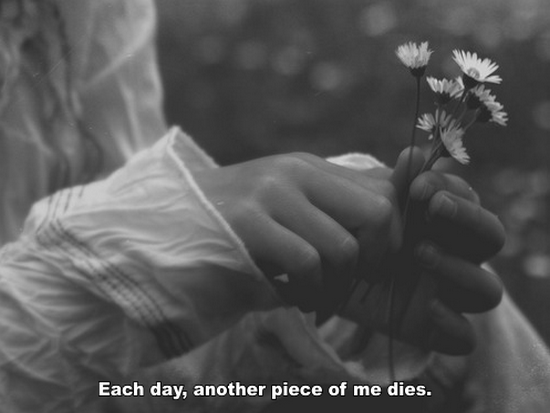 “I want to kill myself.” Sadly, all too often the self-loather’s final assessment of “life.” But maybe the self-loathing manifests in anorexia or another eating disorder. Perhaps self-injurious behavior, like cutting. Could generate a devastating depression. Yeah, self-loathing – a dark “living” hell. Let’s talk about it, k?

As I began putting this piece together it occurred to me I was treading on hallowed ground. Self-loathing, and its manifestations, are deeply personal – at the very core of who we perceive we are. That said, I write with great respect for those in the midst, and don’t pretend to know their pain and torment.

Marya Hornbacher from Wasted: A Memoir of Anorexia and Bulimia…

My research on self-loathing led me to numerous interesting points-of-view. I decided to share the thoughts of Alex Lickerman, MD. Check-out his blog, Happiness in this World: Reflections of a Buddhist Physician.

Okay, so where does a leaning toward self-loathing begin? Dr. Lickerman believes some of us come into the world predisposed to holding a negative view of ourselves. I’m thinking it’s a temperament thing. Maybe the loathing target is something specific. But maybe one has no clue as to what they hate about themselves – they just do. And then, of course, some folks had the great misfortune of being born to abusive parents or caretakers who in some manner harmed and belittled them, inhibiting the development of healthy self-esteem.

Interesting – Lickerman proposes self-loathers most often believe they dislike their every molecule, but that’s rarely true. He thinks in most cases a self-loather is able to specify what part(s) of themselves they dislike, ranging from the physical to the cognitive and emotional.

How ’bout Lickerman’s take on the self-loather’s dilemma? When presented with a scenario in which a self-loather comes upon a child trapped under a car at the scene of an accident, s/he recoils in horror and would want – urgently – to do something to help. Yet it’s likely no credit would be given to self for the deep humanity such a reaction indicates.

That brings us to why a self-loather finds it so easy to overlook any measure of good within. Lickerman believes in most cases it’s not about possessing negative qualities, it’s the disproportionate weight given them. Folks who dislike themselves may acknowledge they have positive attributes; however, any sort of emotional pat-on-the-back doesn’t occur.

So what’s at the foundation of the perpetuation of self-loathing? Well, Lickerman believes the circumstances that generated the self-loathing trigger a pattern of thought that – without challenge/intervention – cycles wildly out-of-control.

Here’s a for-instance. Your parents may have failed to praise you or support your accomplishments in school when you were young – perhaps even largely ignored you – which led you to conclude they didn’t care about you, which then led you to conclude you’re not worth caring about.

According to Lickerman, it’s the last idea – not the memory of your parents ignoring you – that gathers the power within your life to make you loathe yourself, if not intervened upon early on. And once a narrative of worthlessness embeds itself in the mind, it becomes extraordinarily difficult to “disbelieve it” – especially when one can find evidence (and it’s so easily accomplished) that it represents truth.

But we all know a narrative is just that – a story we tell ourselves. Oh, it may contain tiny morsels of truth – who knows? Still, to proceed from such facts to the conclusion that we’re deserving only of self-beatings constitutes a significant thought error.

We chat this cognitive dynamic frequently here on Chipur. And it goes beyond self-loathing to depression, anxiety, and then some.

That’s it from Dr. Alex Lickerman’s side of the fence. But before we close I want to present an interesting point-of-view from Mark D. White, PhD. He blogs at Maybe It’s Just Me, But…

White, a philosophy professor, brings to the table a tenet of ancient Greek ethics – the unity of the virtues. I’ll let him explain…

The unity of the virtues is the claim that possessing one positive character trait necessarily implies possessing all of them. According to this position…one cannot be truly honest, for example, without also being kind, courageous, and so forth. In other words, there is something essential to being a virtuous person which underlies having the individual virtues. And without that one central, basic thing, you can’t be truly virtuous in any specific ways.

A bunch to swallow, but do you get it?

So consider the following within the context of self-loathing being a denial of one’s virtues. A self-loather considers her/himself a “bad person,” unworthy of concern or love, presumably because the virtues – the good character or personality traits that would justify concern and love – are missing. Yes, if one feels s/he lacks any redeeming qualities at all, s/he is very likely to self-loathe, according to White, “utterly and completely.”

Whether it manifests in feelings like “I want to kill myself” and/or anorexia, cutting , depression, and more – self-loathing is a dark “living” hell. I’ve brought forth what I believe are relevant and meaningful points-of-view; however, if you’re in the midst – or close to someone who is – I challenge you to do your due diligence in learning more.

You had to know I’d say this – knowledge is always, always power (and the precursor of relief and healing – even for self-loathing).

Oh, almost forgot! What to do about self-loathing? Comin’ atcha’ next time…

I’m inviting you to eyeball some 600 Chipur titles. It’s good for ya’…

Next Post: Self-Loathing | How’s ‘Bout Some Warmth, Light, and Hope?

Previous Post: According to You It’s Pretty Much Over. But I’ll Toss You 10 “Yes You Can’s.” Catch!