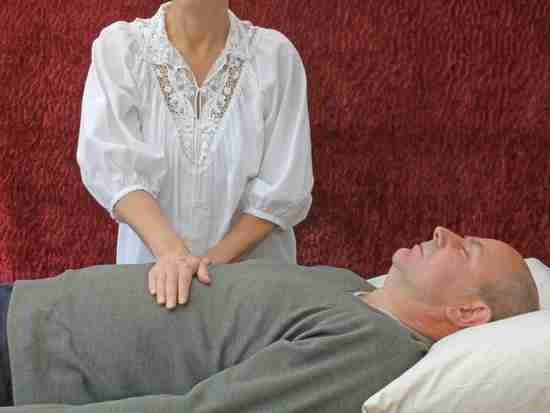 Do you endure major depressive disorder, panic attack symptoms, chronic stress, and more? Ever experience a knot in your gut? How ’bout an unusual feeling in the pit of your stomach? Have you had the wind knocked-out of you? It’s all about the solar plexus, and it may be our emotional ground-zero.

Well, wouldn’t you just know it, the 3rd chakra is centered at the solar plexus. In Sanskrit it’s known as Manipura, and its associated color is yellow – its elements, fire and the sun.

The solar plexus (aka celiac plexus) is a thick cluster of nerves and supporting tissue behind the stomach, just below the diaphragm. Being the largest autonomic nerve center in the abdominal cavity, it manages numerous vital functions, adrenal secretion and intestinal contraction being two.

I became interested in the goings-on of the solar plexus after experiencing the sensation of a chronic knot in between the bottom of my sternum and naval, as well as some poor breathing habits.

In a recent newsletter, discussing color and emotions, I mentioned something known as a chakra. In review, a chakra (from the Sanskrit) is an energy center within our bodies. According to tradition, it’s through chakras that life energy flows into, and out of, our auras. So chakras are all about our emotional, mental, spiritual, and physical beings. It’s said we have seven of them.

But what’s really cool is the 3rd chakra is thought to be involved with power, control, freedom, the ease with which we can be ourselves, self-esteem, personality, ego, and the “mental body.” And it’s linked with a few things we’re all too familiar with – worry, anxiety, fear, and excitement.

Bingo! We have a connection, and a healing target.

Okay, let’s chat about the two solar plexus related maladies that got me started on this journey…

Those who are into healing by focusing upon chakras would propose numerous relief techniques. These may include the application of color, light, and gemstones to specific areas and acupoints on the body. Also used are candles, wands, prisms, colored fabrics, bath and soap treatments, and colored glasses or lenses. Hydrotherapy and aromatherapy are frequently added to a healing regimen.

But if those don’t grab you, how ’bout this simple breathing technique…

Once you’ve accomplished this, visualize yourself stretched-out in the sun in a setting that’s comforting to you. You can very much feel the sun pouring its healing rays down upon you. Take yourself to your solar plexus area and visualize it absorbing golden balls of sunlight – providing great and comforting warmth. At the same time, explore a little bit. That’s right, ask your solar plexus area what it’s holding-on to and what needs resolution – and silently listen to its response.

And while you’re at it, practice your breathing – gently placing the palm of your hand on your diaphragm, feeling it slowly and surely extending outward as you inhale.

You know, I so often talk about living “neck-up.” Simply, it means doing all one can to stay in their mind in either a conscious or unconscious effort to avoid any sense of living down in their body. And the mission is simple – to avoid the solar plexus, and its wealth of feelings and self-opinions.

If you’re in the midst of major depressive disorder, panic attack symptoms, chronic stress, or more – what’s your take on all of this? Anything hit home? Maybe you’ve been dialed-in to the concept – and method of healing – for some time. Regardless, would you share what’s on your mind in a comment?

Are you struggling and need perspective and direction? How ’bout a consultation?

Next Post: Just Another Teachin’ Tuesday: Your future lies in your past…

Previous Post: The Relationship Jinx : Why? And other questions to ask…