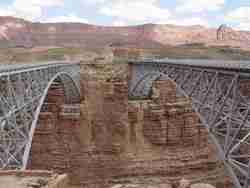 “Okay, Bill – true confessions. Before I leave on a trip I grab a road atlas and review the bridge factor. And, yes, I’ve gone 100+ miles out of my way to avoid one.”

So take a look at the featured image. It’s the Navajo Bridge, spanning the Colorado River just north of Grand Canyon National Park. Interesting – the wider bridge on the right replaced the original bridge (left) for purposes of driving safety (that’s a confidence builder).

All of the above on this side of the fence. Yes! The producer of chipur, a licensed counselor and anxiety disorder vet, remains horrified of bridges. I have gephyrophobia.

Well, that, my chipur lovelies, is a specific phobia – an anxiety disorder.

I’d like to present a series on the specific phobias (in fact, I will). Today we’ll swirl-around what they are. And we’ll come back with an article (or two) on their cause and treatment.

What Is a Specific Phobia?

Okay, those of you who frequent chipur know I’m not exactly in-love with the psychobabble diagnostic good-book, the DSM-IV-TR (editorial: name too long to bother with). However, within the context of specific phobia it’ll at least provide a decent descriptive point of reference.

So let’s take a look…

A specific phobia (good ‘ole code 300.29) is a marked and persistent fear that is excessive or unreasonable, cued by the presence or anticipation of a specific object or situation.

Finally, there are these specific phobia types…

The number and, shall we say, variety of named specific phobias are astounding. To give you an idea, take a look at these…

Wild, huh. But how ’bout these more common specific phobias…

A little something for everyone, don’t you think?

Okay, we’ve gotten off to a good start by defining and describing the specific phobias. But there’s so much more to discover, including what causes them – and how they’re treated.

So that means you’ll have to check-in with chipur over the next few days for the not-to-missed details. Deal?

In the meantime, would you like to read more chipur articles on the psychology of depression, anxiety, and bipolar disorder? Right here. And for a listing of chipur Feelin’ Better articles, just click here.