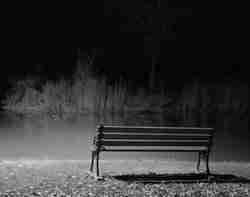 “It’s the aching – the emptiness – I can’t get over, Bill. They only seem to strengthen and deepen. I gotta’ tell ya’, I can’t take being alone for much longer.”

Loneliness is just awful, isn’t it? It’s that deep-in-the-gut ache that dominates every aspect of our being. How emotionally, mentally, and physically pervasive the pain truly is.

So how did we manage to arrive at such an icky and treacherous place? Oh, we well may have taken different buses; however, the route was likely the same.

Sure, in many cases it’s about a loneliness from something beyond our immediate control – say, the loss of someone dear, a move, a broken relationship. But truth be known, most cases of sustained loneliness are a matter of choice (yep, I said that) – in the face of having every resource within fingertip reach to live fulfilled.

Curious thing about loneliness in the life of one who endures a mood and/or anxiety disorder – there’s often quite a bit of ambivalence involved. See on the one hand we’re lonely, it hurts badly, and we want relief – now. On the other hand there’s something “kind of alright” about a solitary existence. So we want company, yet we don’t. That merits a long “hmmm,” don’t you think?

It’s also important to note that the motivation to proactively do something to cure one’s loneliness ills can be tough to come by for someone wedged smack-dab in the middle of a mood and/or anxiety nightmare.

So what is it that’s so valuable about loneliness that leads us to invest so liberally in it? Surely one potential dividend is staying stuck in an all-encompassing state of being can keep our minds off a lot of woes. A diversion tactic? Sure!

And then there’s the matter of a loneliness that focuses upon a specific person (people), place, or event. Perhaps dwelling in the house of loneliness is the only way we know to somehow stay connected with someone or something we hold very dear – and can’t physically get next to in the immediate. Oh pictures and videos are great; however, there’s nothing as soothing as the nearness of a deep-in-the-gut emotional experience (even if it’s painful) to create and sustain a feeling of warmth and security.

Never really was a big John Mellencamp fan, but what’s his song title? Hurts So Good? I think it’s a perfect match for most cases of sustained (okay, I’ll call it “pathological”) loneliness. Yes, something about it really “hurts so good.” And that dynamic and feeling ought to set off all sorts of alarms when they come a callin’. I mean, something just isn’t right, and we have to muster the motivation to seek insight, as well as the will to take resolving action.

Hey, please don’t misunderstand – loneliness is a part of the human condition. Heck, mammalian condition, for that matter. But when periods of loneliness last for long periods of time – accompanied by the ambivalence I mentioned – something’s definitely up (and it ain’t good).

I’ve endured times when I was so lonely it felt as though I was the only human on the planet. Times when even routine end-of-the-day good-byes draped a shroud of darkness upon me. Have you been there? Well, if you’re still in the neighborhood it’s time to pause and reflect – and program your internal GPS to chart a course elsewhere.

What good fortune is ours when an emotional dilemma offers up some major clues. Doesn’t happen often, but it sure is the case with loneliness. Are you lonely – with an ache deep down in your gut? Please see it for what it is (catch the clues), approach it, and elect to grow by taking resolving action..

Truly, there’s no need to be alone anymore.

Previous Post: Foods for Depression? Ya’ Gotta’ Skip the “Junk!”