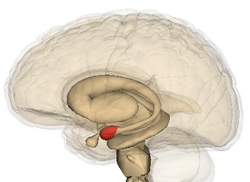 The amygdala: as our personal bodyguard it makes threat determinations and sounds alarms 24/7.  But just when we thought we knew it, brand-new research reveals something very interesting…

…our little almond-shaped wonder processes events and directs indicated action related to what we care about at any given moment.

I’ve been a brain anatomy and physiology freak for some thirty-five years.

It’s a personal priority because in addition to finding it fascinating, I want to understand why I think, feel, and behave as I do.

And given I’ve been dealing with mood and anxiety disorder symptoms for almost fifty years, that means everything to me.

Way back when, the first piece of brain anatomy that grabbed my attention was the amygdala.

Let’s talk about it…

What is the amygdala 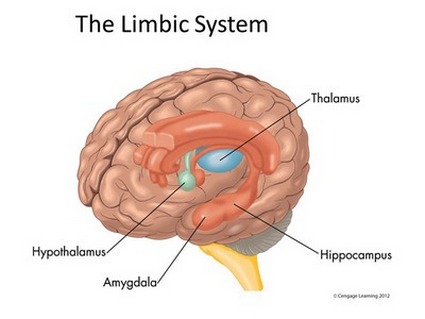 The amygdala and limbic system

The amygdala is an almond-shaped grouping of nuclei approximately one-inch long. Go figure, “amygdala” is derived from the Greek “almond-like.”

We actually have two amygdalae, situated equally in both brain hemispheres. They’re located just a few inches from each ear – inward and in a direction toward the forehead.

The amygdala, a component of the limbic system, is one of the first parts of the brain to develop in the human species.

The amygdala and fear

The amygdala has always been associated with fear, but a new paper suggests this amygdala/fear attached at the hip business needs to stop.

Enter the work of Ohio State University’s Wil Cunningham and Tobias Brosch from New York University. Their paper is soon to be published in the journal, Current Directions in Psychological Science.

Cunningham and Brosch readily acknowledge the amygdala’s involvement with fear. But they’re quick to point out it does its thing within the context of other emotions. Yes, the amygdala welcomes pleasant images and happy faces.

So why the misconception?

Makes sense, actually. Scientists were led to the amygdala on their mission to biologically understand the phenomenon of fear. And when the dots were connected, a whole lot of unfair overgeneralizations were locked into place. Turns out the amygdala was very much underestimated.

How does the amygdala really work?

The workings of the amygdala are extremely complicated. So instead of getting all tangled up, let’s go with its first and cardinal role: modulating the hypothalamus. You’ll see it in the limbic system image above.

It’s the hypothalamus that keeps the body in a stable state – homeostasis. And one of the ways it fulfills that role is by initializing the process that activates our fight/flight response. To learn more, check out The HPA axis and panic/anxiety: What you need to know.

So just in this role, the amygdala impacts several brain structures, generating noteworthy behavioral habits. How ‘bout these…

Just when we thought we knew it

Okay, behind the scenes our little almond-shaped wonder processes events and directs indicated action related to what we care about at any given moment.

So, sure, it’ll activate when it senses danger. But it also gets to work when we’re in the midst of non-threatening – even warm and fuzzy – circumstances.

Now, here’s what I find especially interesting and hopeful about the work of Cunningham and Brosch. In suggesting the amygdala isn’t solely about fear, they’re telling us our definitions of all emotions are likely too rigid.

In my mind, that opens the door to understanding what emotions truly are. And that can only lead to more effective interventions.

It’s not unlike accepting presentations of mood along a spectrum, as opposed to cut-and-dried definitions of, say, bipolar I/bipolar II.

How more effective the potential treatments when we’re dealing with sensible and cutting-edge perspectives.

Oh, one other point. The work of Cunningham and Brosch suggests the amygdala isn’t fully responsible for emotion. According to Cunningham, “Emotion is going to be distributed across the brain.”

And now you know

So that poor amygdala, not getting credit for anything besides fear and misery. It appears as though it was misjudged. And making things right will bring hope and comfort to those enduring the mood and anxiety disorders.

And now you know.

More info on the Association for Psychological Science website.

Thanks for some of the info: KenHub

Would you like to read more Chipur mood and anxiety disorders info and inspiration articles? Well, dig right in.