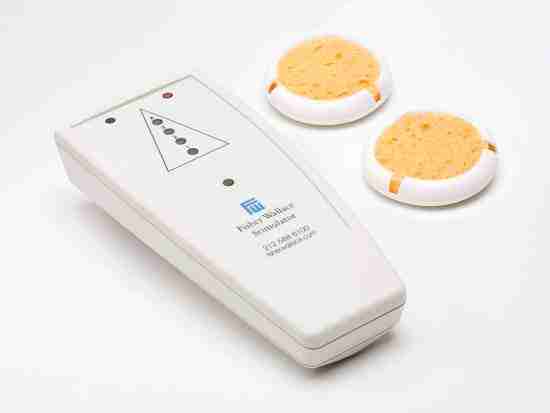 Seems like it’s always about meds. Aren’t there any creative “brain remedies” around? Well, there’s the Fisher Wallace Stimulator. And it’s touted as being effective in the treatment of depression, anxiety, and insomnia.

The Fisher Wallace Stimulator is cleared by the US FDA for at home treatment of depression, anxiety, and insomnia.

If a remedy has a reputation for providing relief for mood and anxiety symptoms, it’s Chipur material.

So now that I’ve hopefully piqued your interest, how ’bout a review…

How does the Fisher Wallace Stimulator work?


The Fisher Wallace Stimulator (FWS) delivers a mild electrical current to the brain. It’s important to understand that the FWS isn’t an electroconvulsive therapy (ECT) or transcranial magnetic stimulation (TMS).

As a bonus, it’s also said to lower cortisol levels.

Conveniently, the FWS is used at home: 20-minute sessions twice daily for the treatment of anxiety and depression, once a day for insomnia.

There are no potential meds conflicts, and the only reported side effects are rare occurrences of mild headache, skin irritation, and dizziness.

The FWS is cleared by the US FDA for at home treatment of depression, anxiety, and insomnia. What does that mean? The FDA has determined the FWS to be substantially equivalent to another legally marketed device. FWL had to send a premarket notification to the FDA to secure such clearance.

A prescription is required to purchase a FWS.

Does it really work?

Well, apparently it does. And relief has been realized in 5-10 treatment sessions. According to report, positive results are seen more frequently with insomnia. Yet, a Columbia Medical Center physician says the FWS has been efficacious in 75-80% of the depression and anxiety cases for which he’s prescribed it.

Of note: FWL has some high-powered medical and science brainiacs backing the FWS, as well as planning research projects. They’re from Harvard Medical School, Columbia Medical Center, Massachusetts General Hospital, the University of Maryland, and more.

FWL says the device should be used daily for 30-45 days before drawing final efficacy conclusions. And they’ll issue a full refund if you return the device within 60 days because it didn’t successfully treat your symptoms.

How to buy a Fisher Wallace Stimulator

Again, you’ll need a prescription. Once you secure one, head on over to the FWL website and get things rolling. A new FWS is $799. FWL typically has payment plans and special pricing available.

Keep in mind, many private insurance companies will reimburse a portion of the FWS purchase price. Be sure to check with yours.

Chipur does all it can to keep you posted on remedies for mood and anxiety symptoms and disorders.

Naturally, I can’t tell you if a psychotherapy, med, supplement, or device will for sure work for you. But I can tell you if my gut says we’re dealing with a hack or con.

No such feeling with the Fisher Wallace Stimulator.

If you found this article relevant and helpful, there are plenty more in the Chipur archives. Peruse the titles.

Previous Post: Mindfulness Based Cognitive Therapy: A sure antidepressant