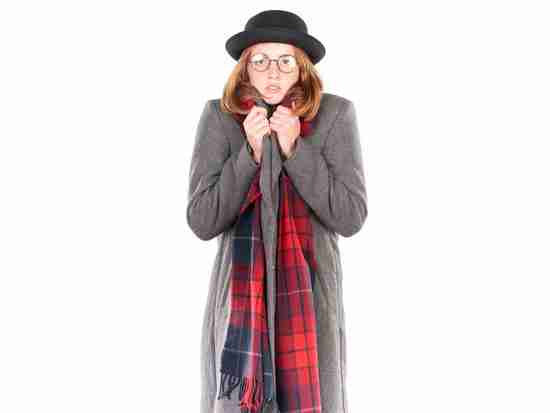 The mood and anxiety disorders can throw so many odd phenomena our way – things that just don’t frequent disorder symptom lists. Sure can be scary, at least until we learn what they really are and how to manage them. And so it goes with the freeze response. Let’s thaw, and talk it over…

It’s entirely possible that you’re unaware that the freeze response is a part of your life, and causing you great distress. I mean, you don’t have to be lying on the ground, stiff as a board, for it to be at play.

In an article I wrote going on five years ago, I referred to them as “back page symptoms” – those stars in our symptom constellation that may not appear in, say, DSM-5 diagnostic criteria.

Truth is, though, they often merit the front page because they can spook us, making what we already sweat to manage all the more challenging.

For instance, many years ago I was taking a shower, and when I extended my arms upward to wash my hair they stiffened-up and began oddly tingling. FREAKED-ME-OUT! And I was sure I was having a stroke.

Over the following days I did some research (which was significantly harder to do in those pre-internet days). Anyway, I bumped into something known as paresthesia, which provided a good enough explanation, allowing me to peel myself from the ceiling. I learned that no matter the symptom, all I needed was a plausible explanation. And all the better if it included something indicating it wasn’t going to kill me.

But now it’s about the freeze response, so let’s begin the thaw…

Visualize it. The chase is on. The warthog has done all it can to evade the lion, but the lion is about to pounce – death being seconds away. But not so fast, because the warthog is feigning death – freezing – hoping the lion is only into chases today, or becomes diverted enough for it to attempt a brilliant evasive maneuver.

Sure seems like good strategy to me. And the best part is, it’s hard-wired, as well as learned, defensive behavior. So if that’s how it is with animals of prey, why couldn’t it be the same for humans?

In his Somatic Experiencing® trauma-healing work, psychologist Peter A. Levine submits that though wild animals of prey, like our warthog, are under constant threat and siege, they’re rarely traumatized.

Why? According to Levine it’s because they possess an innate mechanism that manages and discharges the energy that accumulates in their bodies as a result of self-preservation behaviors. And he supports his theory by observing that when an animal of prey survives a potentially deadly chase, it physically shakes-off unused survival energy before moving-on with the herd.

Levine believes humans are equipped with the same mechanism; however, it’s greatly inhibited by our more advanced cognitive capabilities. Yep, we brain our way out of a complete purging of survival energies; which, in turn, prohibits the nervous system from regaining equilibrium – homeostasis.

And we remain in varying degrees – frozen.

I mean, think of a time when you knew you were physically, emotionally, or mentally frozen. Does it make sense that it happened because you perceived a threat to your very survival? Hmmm.

Though assorted brain structures, neurotransmitters, and hormones are involved in our freeze response, an area of gray matter in the midbrain – the periaqueductal gray (PAG) – rules the roost.

The PAG, often stimulated by our emotional response headquarters – the amygdala – is believed to be involved with physically defensive reactions such as freezing (jumping, running, rapid heartbeat, blood pressure fluctuation, muscle tone increase).

But keep in mind, the PAG has to communicate with other brain structures for its mission to be completed. Case in point, recent research has shown that the PAG communicates with the cerebellum (the blue bulbous mass in the image) to facilitate required “freeze” body movements.

Oh, and how ’bout these value-added features? The PAG is responsible for something known as quiescence, a state of being at ease and immobile – yet highly alert. Indeed, many scientists believe this is a natural recovery response after a go with a real or perceived threat. And just in case things get messy, the PAG is responsible for a natural analgesic process should a brutal death occur. Yikes!

You know, it’s entirely possible that you’re unaware that the freeze response is a part of your life, and causing you great distress. I mean, you don’t have to be lying on the ground, stiff as a board, for it to be at play. Keep in mind, there are varying degrees of freezing: all-out ice, overall muscle tension, clumsiness, dicey coordination, compromised movement fluency, discomfort in close spaces, social hesitancy – even difficulty with decision-making and quick thinking.

But the good news is it doesn’t have to be a permanent arrangement. Once you realize it all makes sense within the context of the natural response it is, and gain insight into its roots within you, you can relax and calm yourself through its immediate presentation. And over time, you can process what’s at the foundation for more permanent relief.

Bottom-line: there’s a reason it’s happening, it ain’t gonna’ kill you, and you can make it go away – or so much more tolerable.

Those back page symptoms can head to the front page in short order, right? And the freeze response sure is one of them. And now that you know what it is, you can watch for it and begin to manage.

And here are hundreds and hundreds of Chipur mood and anxiety disorder-related titles. Come on, dig-in.

Next Post: ADHD, Bipolar Disorder, Borderline Personality Disorder: Okay, which is it?

Previous Post: Hope for Anxiety: An Important Update on Drugs in Development