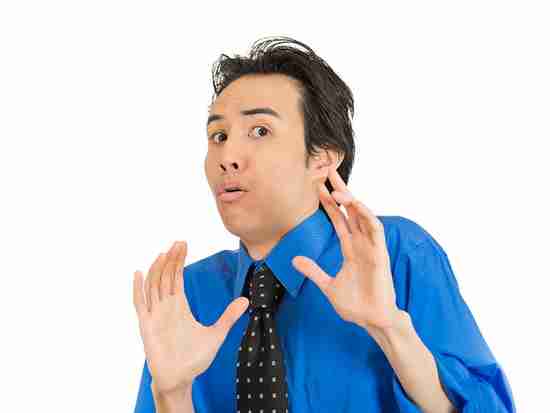 You’ve dealt with tics off-and-on for years. I mean, you’ve kept your stress under control, used cognitive and behavioral techniques, and learned how to cover them. So they’ve been a minor inconvenience. Well, now they’re worse than ever. Stunned, you’re asking some serious questions about cause and how to make them go away. Yeah, “Whoa!”

PET and SPECT imaging have revealed abnormal patterns of blood flow and metabolism in the basal ganglia, thalamus, and frontal and temporal cortical areas. Also involved may be the anterior cingulate cortex.

Let’s wrap things up by learning about cause and treatment…

You know what’s coming, right? No one knows for sure what causes tics. Why does it always have to go down that way with most anything a mood or anxiety disorder sufferer may be dealing with? Kind of goes along with no one knowing why psychotropic meds work (if and when they do).

There was a time when emotional issues were believed to be the primary cause of tics. But those days are gone, as it’s being discovered that biochemical and structural abnormalities may exist in the brains of those enduring tics.

In on the action are believed to be the neurotransmitters dopamine and serotonin, along with the intracellular signaling molecule (“second messenger”) cyclic AMP.

And then there’s the anatomy of it all. PET and SPECT imaging have revealed abnormal patterns of blood flow and metabolism in the brain’s basal ganglia, thalamus, and frontal and temporal cortical areas. Also involved may be the anterior cingulate cortex.

Would it surprise you that genetic factors are at play in 75% of tic disorder cases? Though no single gene has been found to be the culprit, tics are definitely a family thing.

Prescription and recreational drugs may generate and/or exacerbate tics. The most common are stimulants such as methylphenidate (Ritalin) and pemoline (Cylert), amphetamine/dextroamphetamine (Adderall), other amphetamines, and cocaine. To a smaller degree, tics may be worsened by anticonvulsants, opioids, antihistamines, and tricyclic antidepressants.

How ’bout this one? Symptoms of obsessive compulsive disorder (OCD) and tic disorders have been shown to present in children as a result of a streptococcal infection (most commonly, strep throat). The phenomenon has been named Pediatric Autoimmune Neuropsychiatric Disorders Associated with Streptococcal Infections (PANDAS).

Finally, the negative impact of stress and fatigue upon tics can’t be over-emphasized.

How to Treat Tics

As we begin, it’s important to note that most children don’t require treatment for their tics. It’s thought that waiting is a good idea because of the fluctuating nature of tics. Jumping right-in to, say, meds is a dicey proposition because who would know if they’re working in the midst of the fluctuations.

If, after a comprehensive assessment (lots of overlap with OCD and ADHD to be considered), treatment is indicated, it needs to be facilitated by a multidisciplinary team to include a physician(s) and psychotherapist.

When it comes to therapy, most often used are cognitive/behavioral techniques of contingency management (CM), relaxation training, and habit-reversal training (HRT).

A newer med, tetrabenazine (Xenazine), is showing promise as an add-on to the first-generation antipsychotics, allowing for lower doses of each. Also used are alpha-2 agonists, such as clonidine (Catapres) and guanfacine (Tenex).

It’s not uncommon to include a SSRI antidepressant, such as fluoxetine (Prozac) and sertraline (Zoloft) to address assorted mood, anxiety, and impulsivity issues, should they present.

When deciding upon, or using, any med (especially the antipsychotics), please consider, and monitor, side effects. And when it comes to the antipsychotics, keep in mind that dosing is significantly lower than that for psychotic presentations.

Now, it’s important to consider alternative therapies for tics. Though more study is indicated, interest is growing in the positive impact of dietary changes and supplements. Some theorists have suggested hidden food and chemical allergies, or nutritional deficiencies, may influence the development and maintenance of tics.

Well, that’s going to do it for our three-part tic/tic disorder series. Funny, I’d intended to write just one piece, but as soon as I started digging-in I knew that wouldn’t cut it.

So why did I choose to bring you all of this information on tics? I know how miserable and self-esteem grinding they can be. And that’s because I live with a tic disorder. Yep, I’m walking the walk, so I guess I can talk the talk.

Interesting, if we spent any length of time together, you probably wouldn’t know I, well, tic (like a clock?). I mean, I’ve worked hard to manage them, but it’s taken many moons to get comfortable – emotionally, mentally, and physically. But I’m definitely there. By they way, I use a clonidine patch.

So the truth about tic disorders: at times not very much fun, incurable, but manageable.

And life truly does go on…

So don’t stop now. 684 Chipur titles are looking for company.

Next Post: Chips Off the Old Block | Even More Informative Yummies from the Inbox

Previous Post: The Truth About Tic Disorders | The Chummy and Tricky Coexistence of OCD and Tics/Tourette Syndrome