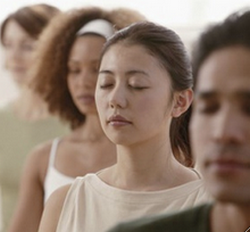 “It’s getting to the point where I’m willing to look at most anything to manage my depression and anxiety. I need ideas! Bill, what’s out there?”

What’s the old saying? “Necessity is the mother of invention.”

Been there, chipur readers. When life gets super tough, you often find yourself scrambling for fixes. And it’s chipur’s responsibility to provide options.

The results of a new study, appearing in the September/October 2011 issue of the American Journal of Health Promotion, are telling.  Those who consistently experience high health care costs showed a 28% cumulative decrease in physician fees after five years of practicing Transcendental Meditation (TM).

By the way, the numero uno contributing factor to those high health care costs? Stress! And that brings us within the realm of the mood and anxiety disorders.

TM is actually a technique – a specific form of mantra meditation. It was introduced in India in the 1950s by Maharishi Mahesh Yogi.

According to religious scholar Kenneth Boa, the TM technique is grounded in the Vedantic School of Hinduism. He goes on to say that, according to the Maharishi, TM was delivered to man about 5,000 years ago by the Hindu god Krishna.

The story goes that the technique was then lost, but restored for a time by Buddha. It was lost again, but rediscovered in the 9th century AD by the Hindu philosopher Shankara. Finally, it was revived by Brahmananda Saraswati (Guru Dev) and passed on to the Maharishi.

Though it’s been referred to as a “religion” in the past; the current TM brain-trust is quick to point-out it is a “no-belief process” and is not a “lifestyle.”

We already discussed the recent research touting TMs efficacy is relieving stress (and lowering health care costs). The TM folks get into more detail by providing “The Eight Reasons”…

Again, the TM technique is a form of what’s known as mantra meditation.

A mantra? It’s simply a sound that’s thought (not spoken) during meditation. Its purpose is to allow your attention to travel naturally to a less active, quieter style of mental functioning.

A mantra is selected by the individual’s teacher and is supposed to suit the individual. Some say there are now only 16 mantras used, and they’re assigned using a simple formula based upon age and gender.

So TM allows your mind to experience the very source of thought, which is pure awareness. This is also known as transcendental consciousness, or the unified field. And it’s in this state of restful alertness that the brain functions with significantly greater coherence, and the body gains deep rest.

The technique is practiced for 20 minutes, twice a day. For best results, one sits in a comfortable position with eyes closed.

Well, I can’t think of too many programs of relief – therapy, meds, etc. – that come at no cost. And such is the case with TM. Here’s what the following fee schedule gets you…

The initial 7-Step instruction, a 16-week follow-up program, and a lifetime of additional free follow-up meetings.

FYI: In the U.S., programs are offered through the Mararishi Foundation. It’s a 501(c)(3) non-profit educational organization.

So yet another relief alternative for you. Naturally, the decision to invite TM into your life is all yours. Again, I’m not offering an endorsement. However, I will say I believe it’s legit and worth having a look-see.