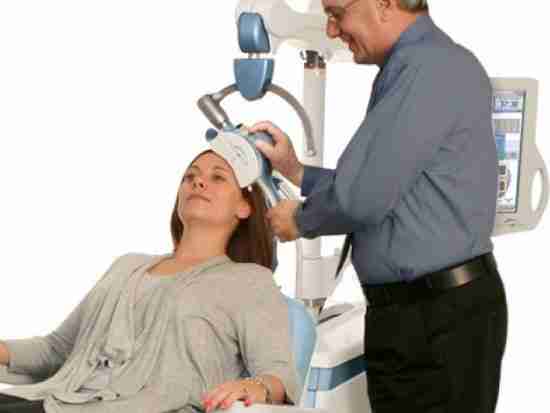 It’s frustrating, isn’t it? I mean not having a clue what intervention may work for your mood or anxiety disorder – if any. Hmmm. Well, I guess that means we have to be diligent in examining all options. Just now, let’s take a look at transcranial magnetic stimulation…

And how ’bout this? Some health insurance companies, even Medicare, have provided coverage for TMS as a treatment for depression.

Okay, let’s get right down to it. Just what is TMS?

Most TMS devices deliver a shallow magnetic field that impacts neurons on the brain’s surface. But some devices can penetrate deeper and are used for “deep TMS.”

By the way, the device in our lead image, from Neuronetics, delivers the NeuroStar TMS Therapy. It’s FDA-cleared as a depression intervention for those who are dissatisfied with the results of standard drug therapy.

Oh, it’s important to understand that TMS has nothing to do with electroconvulsive therapy (ECT).

For What Is TMS Used? 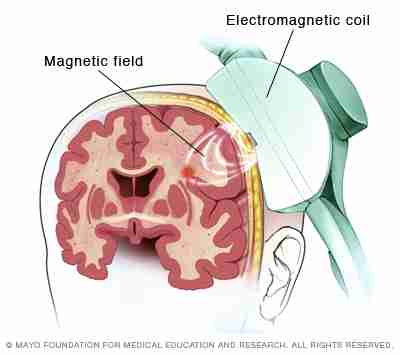 This is very interesting, actually. TMS is a diagnostic and treatment tool.

Diagnostically it may be used to measure the connection between the brain and a muscle to evaluate damage from, say, stroke, multiple sclerosis, movement disorders, and motor neuron disease.

It’s even been found to be a cognitive enhancer for those with no issues at all.

In terms of risk, TMS may rarely cause fainting, and even more rare, seizures. Some patients have experienced pain, as well as temporary hypomania, cognitive changes, and hearing loss. There’s also the possibility of induced currents in the electrical circuits of implanted devices.

And how ’bout this? Some health insurance companies, even Medicare, have provided coverage for TMS as a treatment for depression. But this very much varies by company, country, and region.

Several weeks ago I came upon a wonderful organization, and website, from which anyone enduring a mood or anxiety disorder could learn a ton – The Brain & Behavior Research Foundation.

The team procured 92 treatment-resistant depression patients for the trial. Participants were divided into those receiving the two-coil treatment and those receiving a “sham” treatment (coils placed, no current delivered).

Results? After 20 daily rTMS treatments, and a four-week follow-up, 55% of those treated with the current showed definite signs of improvement. Only 32% of those in the sham group showed same.

And, by the way, treatment was well tolerated, headache and jaw pain leading the side-effects parade.

Yes, the realities of “treatment hit-or-miss” make it tough to live in the mood and anxiety disorder neck of the woods. But disciplined, creative, and diligent we must remain.

Transcranial magnetic stimulation is a huge treatment consideration for depression and, perhaps, other mood and anxiety disorders.

If you’re struggling, do your due diligence – and talk with your doc.

Here’s the full article on the two-coil study.

There are hundreds of Chipur mood and anxiety disorder-related titles awaiting your perusal. Please, do some articles.

Next Post: Chips off the Old Block: “So Much on My Mind Lately.”