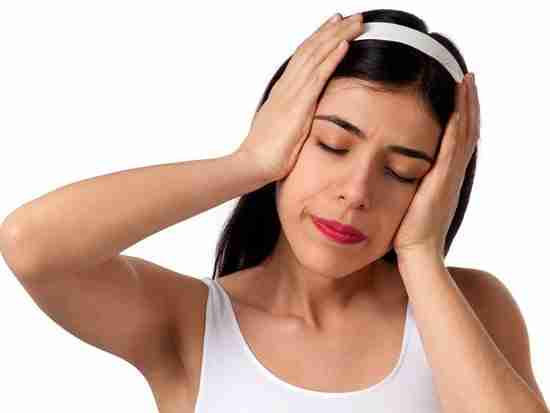 The causes of the mood and anxiety disorders can be a huge mystery – downright baffling. Take, for instance, the vestibular disorders. How ’bout we discuss their role in the generation of anxiety and depression…

‘Anxiety, fear, and panic are probably the most common emotional responses people have when diagnosed with a vestibular disorder.’

Take a look at our friend above. Looks like she’s having a rough go.

Actually, she’s dizzy and having balance problems – common symptoms of vestibular disorders. And we can add anxiety and depression to what she may be experiencing.

Well, let’s get our chat rolling by learning about the vestibular system…

What is the vestibular system?

The main components of the vestibular system are located in the inner ear, in a system of interconnected compartments known as the vestibular labyrinth.

The vestibular labyrinth is made up of the semicircular canals and the otolith organs – the utricle and saccule.

From there, the information is passed on to a number of targets, including the muscles of the eye and the cerebral cortex. 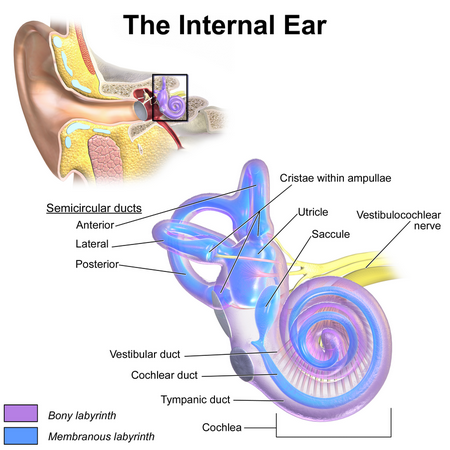 So what we have here is a mega-sophisticated sensory system responsible for providing our brain with information about motion, head position, and spatial orientation.

By the way, problems with spatial orientation can cause panic attacks.

The vestibular system is also involved with motor functions that allow us to keep our balance, stabilize our head and body during movement, and maintain posture.

The vestibular system, then, is essential for normal movement and equilibrium.

And it can be one of those things we don’t know we have ’til it’s gone – or compromised.

Certainly, any of them can be linked to anxiety and depression; however, identifying vestibular symptoms may better suit our purposes.

VeDA says these are the most common…

Unfortunately, those are just the most common symptoms.

I can’t think of a better way of applying what we’ve learned so far to anxiety and depression than to share two powerful sections from a fantastic article.

The Mind/Body Connection, written by Dr. Rachel Bilgrei, appears on the Emotional Impacts of Vestibular Disorders page of the VeDA website…

Anxiety – The Most Common Complaint
Anxiety, fear, and panic are probably the most common emotional responses people have when diagnosed with a vestibular disorder. Anxiety often manifests in response to feeling ungrounded and insecure about being steady on your feet. A fear of falling due to imbalance, dizziness or lightheadedness is commonly reported. Panic attacks are also commonly reported. A panic attack is ‘an abrupt surge of intense fear or intense discomfort that reaches a peak within minutes and during which time [symptoms such as palpitations, sweating, trembling, shortness of breath, nausea, feeling dizzy] occur.’ (DSM-V, 2013) It is no wonder that given the predominance of physiological symptoms, a panic attack is often mistaken for a medical condition, such as a heart attack.

In the context of a vestibular condition, a panic attack only serves to exacerbate physical symptoms, as well as trigger fears of losing control. In response to anxiety, fear and panic, individuals with vestibular conditions experience increased social isolation, withdrawing from social interaction and avoiding activities that normally bring them pleasure and satisfaction. It is important to note that it is very often fear and anxiety, not the actual physical symptoms that interfere with functioning.

Sadness & Depression
Having a vestibular disorder often results in a change in life style. Changes to your activity level (at home and at work), your independence, your abilities, your stamina, and your relationships are experienced as losses. Loss, grief, and the process of mourning are just some of the feelings and experiences that these changes arouse. Social isolation can lead to feelings of loneliness. Feeling misunderstood by family members, friends, even physicians fosters a sense of helplessness and hopelessness. Guilt is commonly expressed in response to not being able to perform your usual duties and responsibilities. In addition, you may experience sleep and appetite disturbance and lethargy. These are the many forms and manifestations that sadness and depression can take in response to a vestibular condition.

Now you know why psychological changes are considered common symptoms of vestibular disorders. Sure makes sense. And Dr. Bilgrei sums it up perfectly, don’t you think?

One final consideration: We’ve been discussing anxiety and depression within the context of an emotional/mental response to vestibular disorders.

But with all the neurological and brain goings on, what if vestibular disorders somehow generate biologically-caused anxiety and depression?

Just something to think about.

No reason to suffer silently

Yep, the mood and anxiety disorders are baffling in so many ways – cause being just one.

The connection between the vestibular disorders, anxiety, and depression is strong.

If you’re presenting with symptoms, don’t ignore them. Get yourself evaluated, connect the dots, and reach out for emotional, mental, and physical help.

There’s just no reason to suffer silently – and alone.

Please be sure to read The Mind/Body Connection on the VeDA website. And while you’re there, snoop around. There’s a ton of valuable information.

Two relevant Chipur articles that are worth reading: Tinnitus: What you need to know about the psych connection and Panic Attacks, Agoraphobia, and Spatial Orientation: A Triggering Association

Thanks to neuroscientificallychallenged.com for the resource material.

Hey! Looking to keep your mind occupied through the holidays? Check out the hundreds of Chipur mood and anxiety info and inspiration titles.