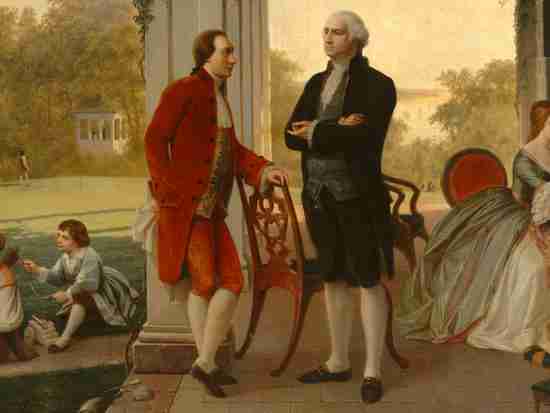 History holds so many lessons for us. Some are hard learning from despicable people and events. But then there’s the wonderful teaching that could only come from goodness and love. That’s what George Washington and the Marquis de Lafayette brought to my life. And I’d like to share it with you…

‘…as I traveled and every hour since, I felt all that love, respect, and attachment for you with which length of years, close connection, and your merits have inspired me.’

It’s good to take a break from the harsh realities of the mood and anxiety disorder world and become wrapped in something totally removed and comforting.

I love to read. And given the amount of time I spend on research for Chipur, as well as my own mood and anxiety circumstances, my leisure reading stays miles away from psych.

Favorite subject matter? History. Heck, I get so into the content that I frequently pencil assorted markings throughout the text. My current read is Washington: A Life by Ron Chernow, and the centerpiece of this article has a large arrow pointing at it on page 488. You’ll know when you come to it.

French aristocrat and military officer Marie-Joseph Paul Yves Roch Gilbert du Motier, Marquis de Lafayette believed in the nobility of the American revolutionary cause. He was so convinced that he made passage to the colonies in 1777 to offer his services.

It didn’t take long for Lafayette to make his way in front of General George Washington, commander-in-chief of the Continental Army. It was said the two bonded immediately. To be sure, Lafayette was incredibly engaging. But it’s important to keep in mind that Washington was 25 years older than Lafayette, and Washington and his wife, Martha, had no children together. So it’s believed that a father and son dynamic was a huge contributor to their bond.

Lafayette, achieving the rank of major general, remained a part of Washington’s inner circle throughout the war. Upon its completion in 1781, Lafayette made his way back to France.

Lafayette returned to America in August of 1784. He had much to accomplish, and you can be sure spending quality time with Washington at Mt. Vernon (Virginia) was tops on his list.

Well, the “reunion tour” came to an end, and in December of 1784 it was time for Lafayette to head to New York for his journey home.

It seems Washington wasn’t ready to say good-bye, so he offered to escort Lafayette to his ship, Lafayette accepting the kindness. Mind you, that’s some 300 miles by carriage – in the winter. 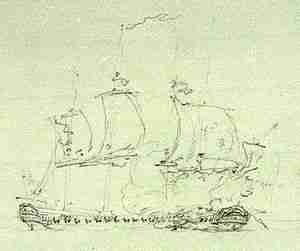 So it was road trip time for Washington and Lafayette. But it didn’t take long for reality to strike.

Let’s set it up. Washington was darned near an American deity after the Revolutionary War. And his ranking generals, Lafayette included, were wildly popular. The other factor at play was the fact that this was Washington’s first trip out of Virginia since returning home from the war.

At their first stop, Annapolis, Maryland, Washington and Lafayette were overwhelmed by hero-worshipping receptions. And, of course, they knew they had to participate.

Washington saw the handwriting on the wall, knowing the social obligations would intensify in Philadelphia and New York. Lafayette knew it, as well. There was only one thing to do, so Washington and Lafayette gave each other an affectionate good-bye hug, climbed into their respective carriages, and went their separate ways.

Not long after parting company Washington penned this letter to Lafayette. It’s astoundingly beautiful. Indeed, it choked me up…

In the moment of our separation upon the road, as I traveled and every hour since, I felt all that love, respect, and attachment for you with which length of years, close connection, and your merits have inspired me. I often asked myself, as our carriages distended, whether that was the last sight I ever should have of you? And tho[ugh] I wished to say no, my fears answered yes. I called to mind the days of my youth and found they had long since fled to return no more; that I was now descending the hill I had been 52 years climbing; and that tho[ugh] I was blessed with a good constitution, I was of a short-lived family and might soon expect to be entombed in the dreary mansions of my father’s. These things darkened the shades and gave a gloom to the picture, consequently to my prospects of seeing you again. But I will not repine – I have had my day.

Washington’s fears were spot-on. He never laid eyes upon Lafayette again. Regarding his ponderings about when he’d leave this world, he lived another 15 years. Not bad for the 18th century.

Being a super-sensitive guy, lessons from Washington’s letter hit me rapid-fire. I’ll share several and hope the letter brings you useful personal insight and perspective.

The loving and respectful relationship between Washington and Lafayette just blows me away. Now, I have the advantage of reading hundreds of pages in Chernow’s book that detail so many wonderful encounters between the two, but who really needs it? I mean, just reading the letter says it all. What a fine example of introspection, vulnerability, affection, and expression. This from a man who typically kept his emotions close to the vest.

Within the context of being 65-years-old, another lesson hit me right between the eyes. I know how Washington felt as he acknowledged the days of his youth were gone, never to return. And his thoughts about having climbed the hill he’s now descending went straight to my heart. Then, of course, the gloom of wondering when his time will come, and if he’ll again lay eyes upon those special ones. You better believe I get it.

But in my mind, Washington delivered the biggest – brightest – lesson as he wrote…

But I will not repine – I have had my day.

Like Washington, I will not feel or express dejection or discontent because I, too, have had “my day.” And it was good, right, meaningful, and purposeful. Beyond that, I have plenty of “my days” ahead.

But even if you’re in your teens the lesson here is relevant and important. For your “my day” to bring satisfaction and peace in your later years, you need to find and nurture life’s meaning and purpose right now. And it’s essential that you begin collecting as many positive life experiences and relationships as possible. Procrastination isn’t an option, because, believe me, the years pass quickly.

So George and Marquis – I respect and appreciate you. Thank you for being who you were and for expressing your goodness and love. Had you not, the lessons would be lost.

May I be even a fraction of the men you were…

Next Post: Living with a Mood or Anxiety Disorder: “Why Me?”